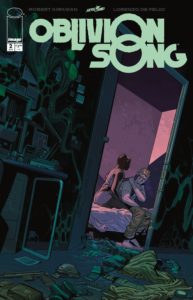 While helping the Crenshaws readapt themselves to their home dimension, it is revealed to Nathan Cole that there are still hundreds of survivors in the Oblivion who are purposefully hiding.

Robert Kirkman doesn’t just simply throw readers into a world of horrors, his work relies so much on the real drama a person would have if they were to live in a world of monsters. Character development always comes first in his stories and that continues in his new series Oblivion Song. One of the best things about the main character Nathan is that it’s not clear-cut that he’s a benevolent hero. Though he’s saved so many people from the Oblivion dimension, he’s still stubborn and somewhat selfish. The search for his brother is what truly drives him and it puts him at odds with those he cares about. Along with him is his friends and assistants, a married couple who are clearly holding things back from each other. All this going on and the mystery of an entire city being lost to a plane of existence filled with creatures still looms. This has been a great two issue start, but it leaves you with a ton of questions.

There is no denying how great the monster designs are by Lorenzo De Felici. Nothing shows off an artist’s creativity more than some horrific creature, but it’s the subtle moments in this comic that really shine. Like in the museum dedicated to the incident, Nathan is casually explaining what occurred as the Crenshaw’s look in horror. Nathan almost looked at peace the whole time while the couple he saved were perpetually terrified. The shadow work Duncan was great following the page with his wife talking to her lover. His ominous stares and hidden face foreshadow either his knowledge of what’s going on or something dark still in him from his time in Oblivion. Great storytelling going on through the artwork. The whole series has a cinematic feel to it. I am a little surprised that the colorist is using such bright colors, it seems like darker tones would be more appropriate for the story.

It’s still early in the series, but I’m loving the journey the characters are already going through. The first issue did a great job of introducing us to the world of Oblivion Song, and this second issue did well in explaining it. Part of me wishes we didn’t pick up the story years after the Transference, but similar to The Walking Dead, Kirkman wants us to see his characters surfing the situation they’re living in, not coming to terms with it. And because of that, maybe we shouldn’t expect concrete answers on what happened, but the mysteries are fun to think about. This is an exciting new series, that has a lot to offer its readers. It just leaves you wanting more.