‘Once Upon A Time In Hollywood’ (REVIEW) 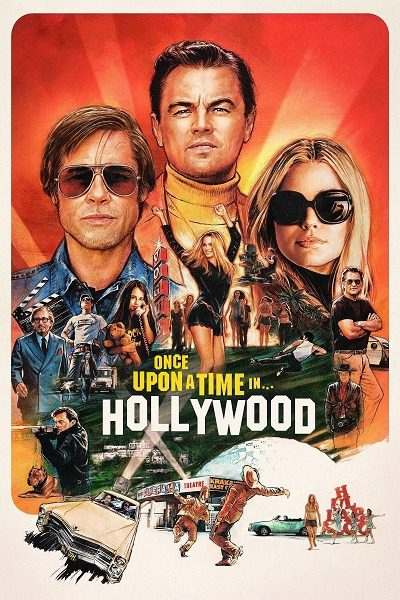 “. . . yet there is no avoiding time, the sea of time, the sea of memory and forgetfulness, the years of promise, gone and unrecoverable, of the land almost allowed to claim its better destiny, only to the claim jumped by evildoers known all too well, and taken instead and held hostage to the future we must live in now forever.”   -Thomas Pynchon, Inherent Vice

There is an air of melancholy that lingers throughout Once Upon a Time in Hollywood. With Rick Dalton (Leonardo DiCaprio) and Cliff Booth (Brad Pitt), we see men of a bygone era that the new Hollywood is leaving behind. Once a bonafide star on the 1950s show Bounty Law, Rick is now slumming it by playing the villain of the week in one Z-grade TV show after another. “Face it, old buddy,” Rick says to Cliff in an early scene. “I’m a has-been.” When he embraces a sobbing Rick, the look on Cliff’s face lets us know that there’s even less work for a has-been’s number two. Even at home, Rick and Cliff can’t escape the specter of new Hollywood.

Living next door are the hottest new director in town, Roman Polanski (Rafał Zawierucha), and his wife, Sharon Tate (Margot Robbie). With little dialogue, Robbie nevertheless embodies the presence of Sharon like no one else could. More than just a vision of beauty, Sharon Tate in this film represents a vision of optimism. A vision of the wondrous possibilities of the future. But her presence is countered by the emerging Manson Cult. While all are affable and charming in appearance, we know what sinister possibilities linger beneath their easygoing personalities.

It’s difficult to look at Once Upon a Time in Hollywood and not see it as a reflection of Quentin Tarantino grappling with the new face of filmmaking. As Rick and Cliff are reckoning with an industry and public that have left them behind, so too is Tarantino. Film, long Tarantino’s preferred medium, is becoming used less and less frequently. The theater I viewed this screening at only recently had film projectors recently reinstalled, and the 35mm screening required no less than three reel changes.

Otherwise, the (largely digital) theatrical experience is all but controlled by Disney these days, with most filmmakers turning to cable or streaming for creative outlets. When even Martin Scorsese must turn to Netflix for his latest film, The Irishman, there is very little room for filmmaking beyond the horror or blockbuster genres.

This isn’t meant to make Once Upon a Time in Hollywood sound like a depressing or dark film. On the contrary: this is the closest Tarantino has made to an outright comedy. Whether it’s Rick repeatedly forgetting his lines the night after a drunken bender, Cliff’s showdown with Bruce Lee, or the bombastic finale, this is a Quentin Tarantino film through-and-through. And that means a marriage of blood and violence, with all the odd catharsis it can bring.

When the film ended, the lights came up, and I made my way home, I thought most strongly about something that was present throughout the film. Something that I hadn’t seen in a mainstream Hollywood film in years: film grain. It was a rush of nostalgia to see grainy film again. It was a great reminder of the theatrical experience I hadn’t seen in a good long time. As progress marches forever forward, the flaws of the past are corrected and smoothed over. But in doing so, we remove a part of what makes an experience an experience. After Once Upon a Time in Hollywood ended, I wondered how long it would be before I would see another movie with film grain again.