Marble Madness meets Tempest in this modern game with an old school feel.

The term “tough but fair” gets a lot of use when it came to Nintendo games. Titles such as Mega Man, Ninja Gaiden, and Contra tested our skills and honed our fast thumbs while providing a frustrating yet rewarding experience that kept gamers coming back for more. With the flood of games on Switch eShop, there have been quite a few that have pushed the limits of difficulty and failed to maintain the balance of fun and soul-crushing defeat. oOo: Ascension for the Nintendo Switch aims to achieve this balance with a unique blend of speed and style. Check out the trailer below.

Created by solo developer Kenny Creanor, oOo: Ascension is a fast-paced arcade game where players maneuver their small ship through spherical mazes without touching anything (and I mean anything). Mazes are set up on their own globes and feature a variety of impeding objects including spinning blades, lasers, and moving platforms. There are 9 Sectors, each with 10 levels, and in true devotion to its arcade roots, each level is increasingly more difficult than the last. Levels are set with a timer and a goal but success is often just reaching the end without exploding and not meeting an arbitrary time expectancy. 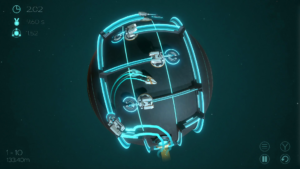 The ultra-fast gameplay is challenging but not unbeatable, granted some of the later stages will have you wanting to break your controller in rage. Although the graphics and presentation may seem simple, the game succeeds in bringing a visual flair to every environment. Each Sector uses a different color palette that pops on the Switch screen, even in handheld mode, and uses colorful textures in the vein of Geometry Wars. The shape of the levels is reminiscent of Super Mario Galaxy with its rotating globes and camera that is forever locked above the player to keep the view centered at all times. The controls often feel loose but this is due to the clever design of the game that leaves the player to learn how to navigate the physics of the ship and use them to their advantage. Don’t get me wrong, there were many stages where I was screaming “that’s not fair!” but I often came to realize it was me, not the game.

oOo: Ascension is a blast to play in short bursts, however, it’s handicapped by the lack of story or narrative. It is what it aspires to be, an aggressive arcade racer, but it forces players to ask the question of how much time their willing to put into a frustrating game with no payoff besides pride and high scores. Overall, its beauty and design outweigh the shackles of the arcade genre and provide a fun experience.

oOo: Ascension is available of on the Nintendo Switch, Steam, XBox One, and will soon be released on the PS4.