Over The Ropes #1
Mad Cave Studios

The world of professional wrestling will find a new champion when an unlikely superstar takes his shot at greatness.

In a small town in Alabama, Southern Fried Wrestling is a way of life and the town’s champion is the company owner Ramblin Ricky Radison. Loved by everyone, Ricky is the most famous person in town and his legacy continues with his son Billy, who is poised to be the next superstar in the SFW. 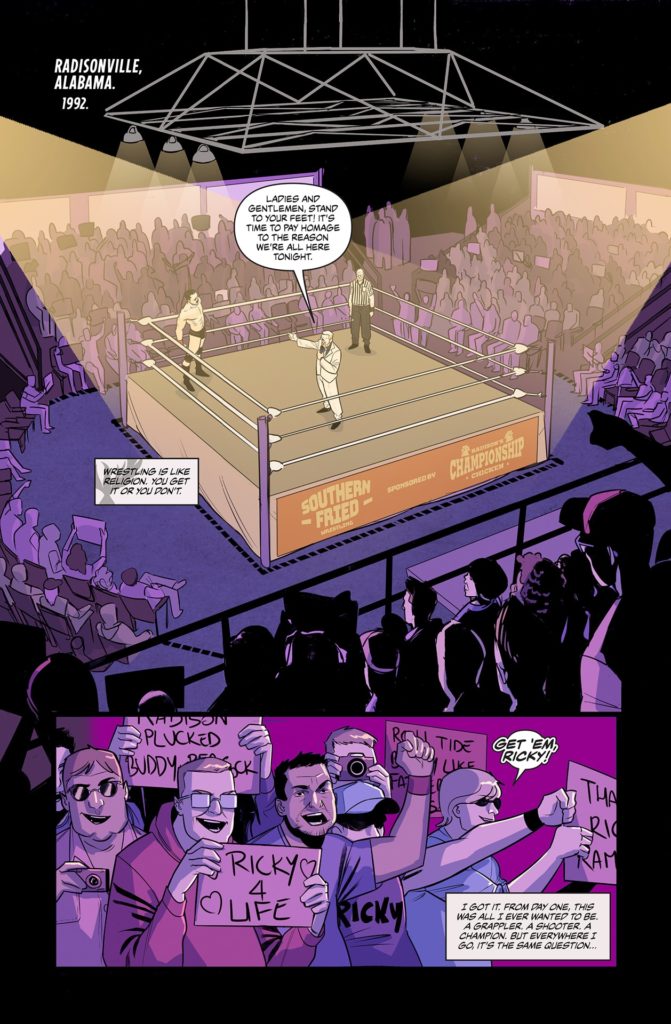 In contrast, Jason does not have a bright future in the wrestling world. He scrapes by as a Jobber with dreams of stardom and no connections. When the opportunity presents itself for Jason to step into the spotlight, he will do so in defiance of Ricky and to the fury of Billy. Jason’s rise to the top of the SFW will give him everything he wants as well as a giant target on his back.

The first issue of Over the Ropes delivers on everything that is fun about the wrestling world along with a protagonist that is interesting and engaging to the reader. Sandlin makes a brilliant choice in making Jason the narrator of this story. It grounds the story and makes it more accessible to the reader. You find yourself rooting for Jason because you learn more about him than just his circumstances. The pacing of the issue is done well. The story builds to its moment of truth organically and doesn’t waste a lot of time on the minutiae of an origin story. It tells a tight story with interesting stakes and a conclusion that hooks you to want to see what happens next.

Antonello Cosentino compliments the story with awesome artwork. The style is perfect for the tone and themes of this story and the action is fluid and kinetic.