Paddington 2 is just as fun as it is for adults as it is children! The movie isn’t all laughs. It’s very much family oriented. All Paddington (voiced by Ben Whishaw) wanted to get his aunt a pop-up book for her 100th birthday which turns out to be much more difficult than expected. All the way to being Enprisoned, becoming popular with the prisoners, to a jailbreak. He has quite the interesting to say the least, adventure. There were many lessons learned about humans and how most of them accept him as an equal. But also that they can be consumed by greed. The biggest that your family loves you and will stop at nothing to save you and true friends will always show up in your time of need. 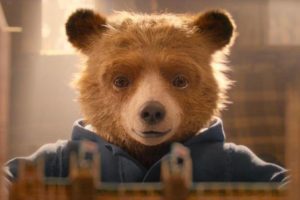 I enjoyed a lot of things about this movie. Some of my favorite moments were the ones with Mary Brown (Sally Hawkins) in them. She was hilarious with her goofy and optimism attitude were always good for a laugh but also very heartfelt. I also enjoyed that the film during Paddington’s absence in prison, it showed the Browns’ story as Padding awaited his fate in jail. And we could more time to sympathize with their loss. This is the best live-action animated movie that I’ve seen since possibly the 90s. It’s a perfect movie to buy to watch with your family. It’s not your run of the mill children’s movie. I may have even enjoyed it more than my niece. It comes to Blu-ray on the 24th.

Want more Paddington? Well, with a movie as charming as this one, why wouldn’t you want more? Well don’t fret, Paddington 2 comes with several bonus features diving into the characters of the film and of course, Marmalade:

Paddington: The Bear Truth – In The Bear Truth, Producer David Heyman and Director, Co-Writer Paul King discuss diving back into the world created by Michael Bond and break down Paddington’s beautiful British charm and politeness. Paddington looks for the best in people and this documentary highlights this. The feature also includes a special appearance from Karen Jankel, the daughter of Michael Bond.

How to Make a Marmalade Sandwich – This feature is exactly what it’s titled. This breaks down how to make the perfect marmalade sandwich, and to be honest I’ve never been more interested in a bonus feature before. All this talk of marmalade throughout the film may have stirred up a bit of a craving. The feature is narrated by a young child and the instructions provided are easy to follow for both kids and adults. This is a great feature to add for those interested in having their own take on Paddington’s own special sandwich.

Music Video with Phoenix Buchanan – The feature is simply the song featured at the end of the film. No worries, I won’t spoil it for you though.

The Magical Mystery of Paddington’s Pop-Up Book – That’s right, the book Paddington wanted from the beginning. This feature dives into the importance of the book, and its creation. “The book is a love letter to the original illustrations to Paddington but also, it’s a love letter to the art and design of the 1920’s and 30’s and these glorious pop-up books.” If you are reading this prior to watching the film, the book is the highly sought after item in the film.

Knuckles: A Fistful of Marmalade – This feature breaks down the character of Knuckles McGinty, played by Brendan Gleeson, from his tough exterior to his heart of gold and his love of Marmalade. Brendan, David Heyman, and Paul King discuss the development of Brendan throughout the film and why this tough intimidating fellow quickly became a fan favorite.

The (Once) Famous Faces of Phoenix Buchanan – Phoenix Buchanan, played by Hugh Grant, is the antagonist of the film and a man of many faces. Phoenix is an over-the-hill actor and a master of disguise who crosses paths with Paddington and will stop at nothing to get what he want’s no matter who it harms. Paul King discusses the process of bringing Phoenix’s character from paper to real life and how the role was created precisely for Hugh Grant.

The special features, just like the film itself, really caters to fans both young and old and are an absolute treat for those fans of the Marmalade lovin’ bear. The film is available now for Digital HD, but the Blu-Ray and DVD is set to drop April 24th. If you were a fan of the film, or of Paddington himself, I highly advise picking this up when it drops.