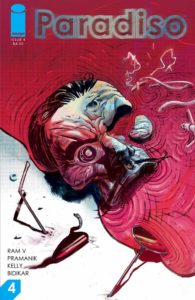 On his way to the Centrum, Jack recalls a lost memory of tinkerman, Yosef and the birth of Duece. He’s able to power up the pneumas but at a cost.

Right off, you can tell Paradiso wants to be a story that delves deep within its own mythology. Which is what intrigues me most about the series. But since it is only four issues in, we are at the stage where every new concept is being thrown at the reader with very little explanation. By the time you get to read the next issue, you’ve already forgotten what a Guardian is or why Jack is attempting to go to the Centrum. Mostly because the reasons were too vague to remember anyway. Which is a shame because it features such interesting character and epic action sequences. I’ve compared it to an anime or manga before and I mean that with the utmost respect. Perhaps I’m just too dumb to fully enjoy what’s going on, but I feel like a “what happened so far” page at the start would do wonders because there’s a lot to enjoy. It’s an exciting new series, but I’m spending most of my time reading this comic trying to figure out if I missed something. 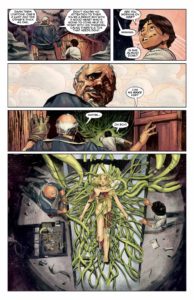 The artwork is definitely the star of this series. There was such lovely and unique character designs. You need to take your time to enjoy just how detailed each character is being drawn. The landscapes are usually sparse which fits the post-apocalyptic vibe they’re going for, except for the pages highlighting Paradiso. A futuristic city that has been torn apart. I love how stylized the art is every issue, it’s different from anything else you’re reading today.

The flashback with Yosef was a weird one considering he first seemed to be a father type figure to Jack. I wonder if their relationship was meant to be as creepy as it came off. It was clearly a beneficial one for Yosef, which makes you wonder how Jack wound up in his custody. As for the Guardians, I’m hoping we get an explanation for Mr. Honeybad being upset. I didn’t quite understand if it was because of who he was sent to fight or what happened during the fight. Each issue leaves you with a ton of questions, but it does make you want to pick up the next chapter. I’m hoping certain things get fleshed out a bit more because this is a series I have high hopes for. It’s a really trippy sci-fi fantasy that is trying to give readers more than what’s on the surface. It just needs to slow down and smell the roses for a bit in my opinion.