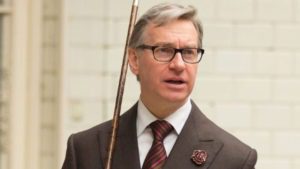 Paul Feig will once again be dipping his toe into the world of the supernatural.

Following his recent black comedy thriller A Simple Favor (which can currently be viewed on Hulu and Amazon Prime), Feig’s next project will find him working alongside Universal Pictures in a new project featuring characters from Universal’s monster movie canon.

Per Deadline, current details are sketchy, as Universal would not go into specifics about how it would tie into the broader monster universe. Leigh Whannell’s upcoming Invisible Man remake (a Blumhouse co-production releasing on February 28, 2020) was the only definitive reference given in Universal’s press release. Neither was any word given as to which Universal monsters would be used, but the current plan is said to include a mixture of classic monsters and original monsters created by Feig.

Paul Feig famously dipped his toe into the supernatural with the 2016 reboot of Ghostbusters, featuring Melissa McCarthy and Kristen Wiig. Feig’s next film, Last Christmas, can be seen in theaters on November 8.