Poop: The Game! – A GenCon Interview 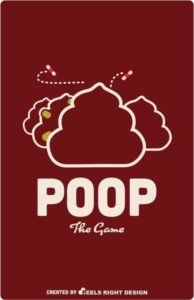 Much like everyone who enthusiastically enjoys card games and board games, the more ambitious of the lot eventually ends up trying to create their own games, and that is what game designer Blaise Sewell did in grade school. It was perfect for rainy days, indoor recess days when bored. That’s how many game designers I have talked to at expos and cons got their start in the industry. But in terms of published games, Blaise self-published a game called Zombie Shuffle in 2012 and was also released on Kickstarter and has gained some fairly great reviews on several board game sites.

His second self-published Kickstarter game, Poop: The Game, is kind of the love letter, to all the poop humor in his brain that had been knocking about for many years. Blaise had a partner who helped come up with the idea of Poop: The Game. Emery, the younger half of this Father/Son Game Designers team was 6 years old at the time and liked to poop just as much and decided they decided to make a game about it. The card game is definitely for ages 6 and up as it is an uncomplicated and quick game to pick up the rules. 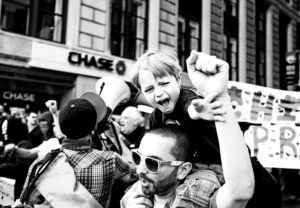 Geeks World Wide: What was the process of making this game like?

Blaise Sewell: I invested about a month and a half straight of play testing to get a good balance and working out ideas. It’s crazy because everything just fell into place. The mechanics of the game follow directly with the physical action of the game’s namesake. My son and I asked ourselves; What the mechanics of pooping were, what the end game scenario was, which is getting rid of poop. And then adding on factors like; clogging the toilet, which you neither want to do in the game or real life. So there grew game elements like flushing and such. During the play testing, my son would play a poop or flushing card, and he would make a sound to go along with it and that was a feature that was something we wanted to include in the game. 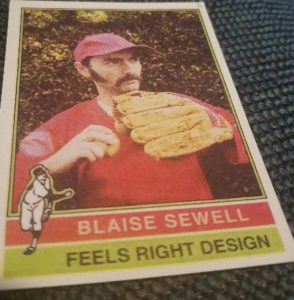 GWW: Any advice for aspiring game makers and what they could do to make their own games?

BS: People come at games from a developing level, at so many different points of view. There are games as art and games that are very niche. There are games where the physical game and pieces cost upwards of a hundred dollars and a game that deals with anxiety and what that is like going through. If you’re looking for commercial success, make the most accessible game possible. Like Poop: The Game is very accessible; literally, everyone around the world does it so everyone can understand what it is about. It’s even more universally known than food, which is kind of the opposite from poop. Everyone has a different opinion about food and taste, how much to have how to make it and so many other variables. Poop is very straight forward every time. So if you are trying to create a game with such a wide appeal, try and fill in something that people wish existed. Try to find those nooks and crannies in culture.”

GWW: What has been the thing about self-publishing Poop

BS: The best experience from bringing about Poop: The Game, was meeting a lot of great people. A lot of people you would want to be cool, in terms of big game designers, are actually really awesome people. I made friend Jenga guy, the Bop it Game guy. As an example, I met the Jenga guy and told him I adore the game like many other people probably have. And the next day (this was at New York Toy Fair)he told me that he was just in a meeting with Toys R Us and he mentioned the game to them.

Blaise’s reaction to how someone he just met was in awe that someone could be so incredibly nice. Like who does that? A game designer could be a complete jerk and not care because people would still buy their game. They were just genuine.

GWW: Any games planned for the future?

BS: There are a lot of games I have planned that have been in development for a while. I have been working a lot with 3D stuff. I still do graphic design. But a game coming out next month, Suddenly Stoned, is very different from Poop. And I’m working with Skaidris Gunsmith, who put out the original game Suddenly Drunk, on the Suddenly Stoned version. Which again, is a different game from Suddenly Drunk because people don’t play party drinking games the same way they would with cannabis. That game will be released next month at Cannabis Cup put on by High Times. Also, I have been working with Razlo Bailey, we created a toy line Pixel Pals. We actually just got our first license for a major comic book character, and later I have a meeting with Cartoon Network where we are looking to get a few of that license as well.

Again, my favorite part about going to expos, cons, and shows is meeting with the indie self-published developers. You can really get a great sense of the passion for what they are doing. After buying myself a pack of Poop, I immediately told several of my friends about the game and based on the name and idea alone, they too couldn’t wait to give the game a whirl. 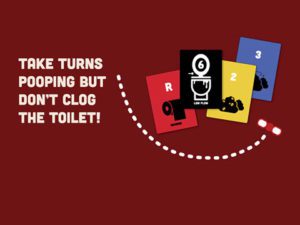 Where you can find Poop: The Game ;