“The #MeToo movement has been a paramount inspiration to my creative endeavors,”says Tatone. “The courage of individuals has inspired and empowered me, not only as a female director but as a truth-seeker.”

“’Colors Bleed’ highlights togetherness: standing together against global issues. #MeToo has put the spotlight on equality, and through this video, we were able to portray the many ways we’re pitted against each other and how we can’t fight fire with more fire. As men and women, we have come alongside one another and stand together peacefully. I’m grateful and honored that Pop Evil invited me to collaborate with them and be a part of their journey.”

This is the second song we’ve heard from POP EVIL off of their new LP slated for release next month. The band debuted “Waking Lions” back in October and it is quickly approaching Top 5 at Rock Radio with no signs of slowing down.

Both “Waking Lions” and “Colors Bleed” serve as iTunes instant gratification tracks, meaning fans who pre-order the new LP on iTunes will get the songs as instant downloads.

POP EVIL also had the opportunity to have their song “Be Legendary” debut on ESPN during 2018 CFB Playoff National Championship game. ESPN loved it so much they picked up the song for the rest of the NCAA College Basketball Season.

The band will embark on the Music Over Words Tour, which will serve as the official kickoff for their recently announced all-new, self-titled LP. Additionally, POP EVIL is confirmed for festival dates Carolina Rebellion on Friday, May 5th, and Fort Rock on Sunday, April 29th.

The massive US tour kicks off on February 14th in Sault Ste. Marie, MI at the Kewadin Casino. The band will hit both sides of the U.S. coast before wrapping things up at The Fillmore in Detroit on April 6th. Band VIP goes on sale Tuesday at www.popevilvip.com. PALAYE ROYALE and label-mates BLACK MAP will serve as support for all dates. 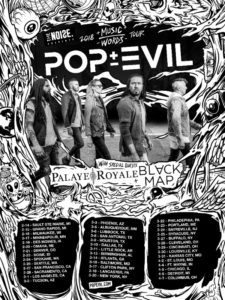