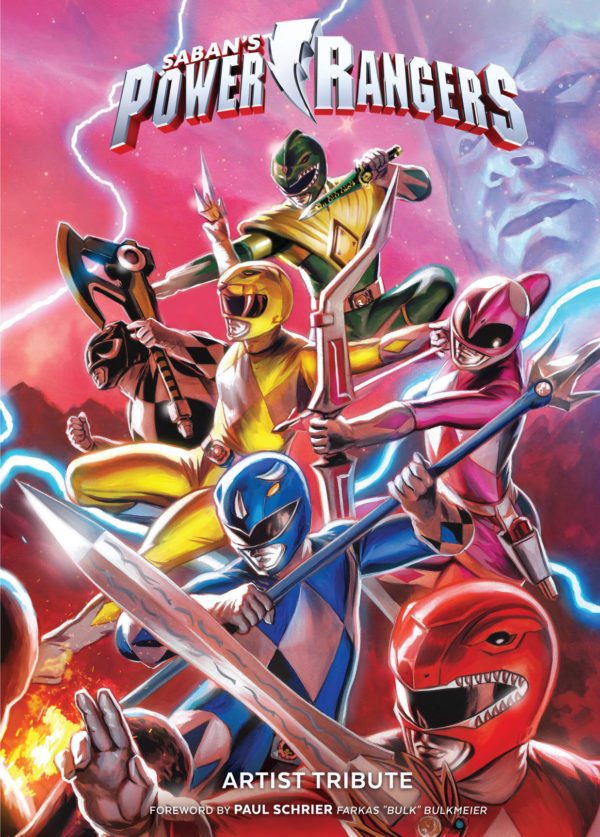 BOOM! Studios are treating us with something very special. The Power Rangers Artist Tribute is here with many pieces dedicated to the franchise that is over 25 years old! We’re also given a foreword intro by Paul Schrier who some of you may know him as Bulk from the Power Rangers franchise on TV. Danielle Baker also shares us a little bit of reflection on the show, as she was the costume designer from MMPR-Wild Force, with the book closing with an afterword from Melissa Flores who is the director at Boom! Studios for all of the Power Rangers content. These shared bits are most certainly worth the read and you can really feel the passion these people have when it comes to this franchise, whether it was being with it from the beginning or becoming a new fan of it.

The art presented to us first is dedicated to team shots of every incarnation of the Power Rangers from the beginning with Mighty Morphin Power Rangers to Ninja Steel. After that, the book continues giving us dedicated pieces of specific teams, Rangers, Zords, villains, and supporting characters. It’s quite fun seeing all the different takes on these characters from the plethora of artist that took the time to give this to us. Fans will be able to find favorites and essentially be in awe of the way these characters are shown off. Even though I myself stopped dedicating time to watch the show after Lost Galaxy, I still would take a look what is going on in major points of each season as my love for the franchise never went away as I got older and I’m still amazed to see that it’s still going strong today even outside of TV. I will say the only downside will be not seeing pieces done for specific characters whether it was your favorite ranger or villain from the franchise. When dedicating a franchise this old, you would need many more pages if you wanted to see a piece that focused on characters such as Ecliptor or the Magna Defender.

The end portion of this book collects some of the variant covers from the current MMPR comic book series, which is great if you aren’t someone that is able to collect every cover out there but may leave some fans and collectors wishing the pages were used for more original work. I have to say that this is an essential book for fans to add to their collection as there is nothing but pure love thrown in here and you can feel that the artist themselves were definitely fans of the show too. If I had to pick one word to describe this book, it would MORPHINOMINAL!