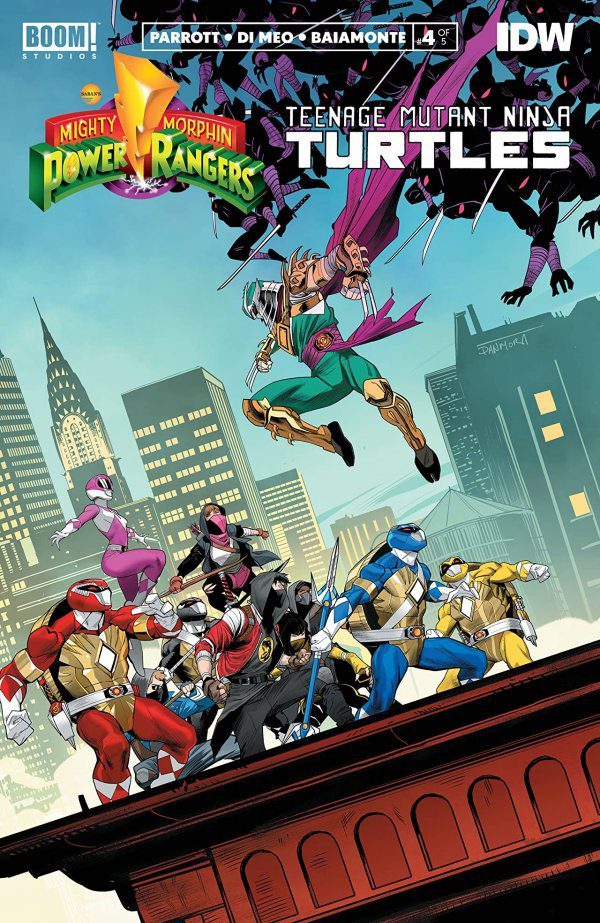 One quick note before spoilers: with everything that’s going on right now across the globe, if you’re looking for a fun time and a true escape, Mighty Morphin Power Rangers/Teenage Mutant Ninja Turtles is a great option. There’s humor, there’s action and there are characters kids can fall in love with if they haven’t already — which are also characters comic book fans have loved for years.

This miniseries couldn’t be ongoing at a better time.

Most comics contain at least one funny moment, but I seldom let out an audible chuckle when reading. But when the Turtles pleaded to Leonardo to say ‘It’s Morphin Time!” and he actually did it, I couldn’t help myself.

There’s just something about heroes geeking out over other heroes that’s special. It almost validates us as readers, and makes characters even more relatable.

Because, let’s be honest, who wouldn’t do the same if they got the Rangers’ powers?

Also, the Ninja Rangers outfits are sick. Kimberly’s looks very similar to the Ranger Slayer outfit. And before reading her request, “Can we wear these all the time now, please?” I was thinking the very same thing.

Hopefully we get some more Raphael vs. putties going forward. We don’t get to see him unleash often enough.

Lastly, we need Shredder in on the action ASAP in Mighty Morphin Power Rangers/Teenage Mutant Ninja Turtles #5. He looks too cool to remain on the sideline for the entirety of another issue.