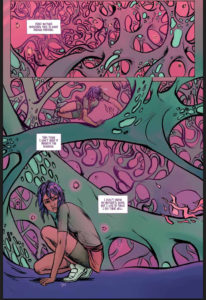 Prism Stalker #1 starts out quite weird. When you see the first few pages, you’re welcomed with some great coloring as you start exploring this world with our main character. At first, to me, it felt like some sort of journey and the imagery was very lucid. After taking a second look though, I noticed that she was sneaking around the creatures we learn a little about later on in the issue. I admittedly was a bit lost in the first half of the issue. I will say that it does come together by the end of the issue. I think the intention was to feel lost at first as you go through your own journey learning about our characters, setting, and surroundings. Vep is someone who comes off strong-minded who cares for those around her and want’s nothing more than to see her family.

Her situation leaves her constantly separated though. The creatures I mentioned earlier that we see in the issue turn out to be her owners as they force her and others to tirelessly pick food for them. There are still so many questions left after reading this issue. I will say Vep’s actions give us a good idea of the kind of person she is. Mainly due to the little amount of dialogue she has. The creatures that are in charge will leave you wondering how they gained control over all these people. Why do they need them to farm for food, and what is it they want Vep to do for them? It’s obvious that the young ones that are separated from their parents and are all being led with lies. They’re described as exiled and perhaps later down the road we’ll gain some insight about where they came from. 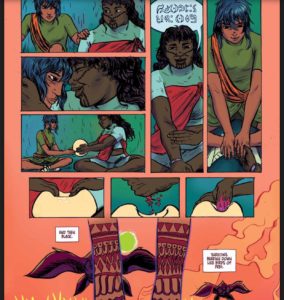 I rather enjoyed some of the designs in this world though. You pick up quick on simple things such as where they sleep and where they work and the dangers that come with their surroundings. The leading creature has a great design of feeling threatening, probably because of all the sharp teeth he keeps exposed. The world Vep lives in is frightening with no escape in sight. As most of the issue is spoken through its visuals and we don’t really get any type of exchanges between characters until the latter half. I think there’s a great opportunity to tell a story of survival if that’s the direction it goes.