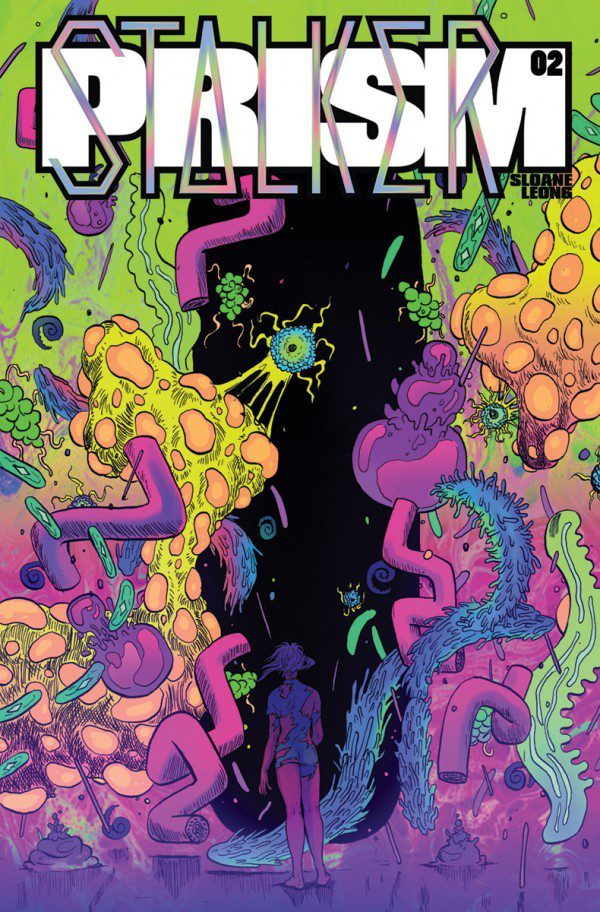 In the new issue of Prism Stalker, we’re taken to a new world and the way we get there is quite something and a bit strange. The issue has a few spots where it takes you into a dream and then it all slowly begins to turn into a nightmare. I think that’s the best way to describe Vep’s current situation right now. The opening page of a silhouette of Vep among the nighttime stars uses a great blend of purple and black and it’s very peaceful to the mind. All of that changes very quickly though once she has finally awoken from her sleeping pod after being knocked out at the end of the last issue. We’re introduced to some new characters very briefly but what’s important here is that there are many other species that are in the same boat as Vep.

All of them trapped as slaves as they continue to work towards a goal of being with their family which all feels like a faraway dream that will never be reached. When we reach the new planet called Eriatarka, which the view from the outside certainly screams that it’ll be a very pleasant stay. Vep goes through some type of test to assure she is fit for this new “academy” that she has been taken to for more specialized tasks. This is another point where we see Vep go through some hard times and a hint of why she is being kept away from her parents. By the end of the issue, we find out how the new place Vep has been taken to will work as she is joined by many others that are brought here. The coloring in this run stands out very strong as how some of the pages seem to look very lucid, especially for all the parts that are in Vep’s mind. I was also glad that we got to see new types of creatures in this issue. None of them as of yet seem to be a future major supporting character for right now but that is something that can always change.

I definitely found the pacing of the issue to be a bit odd at times and would feel lost unless I went back and read through certain pages again. Even with that, we still being taken to a very weird place here that we don’t have a full grasp of how everything works but the direction it is going is slowly building up. Vep doesn’t really get that much of a push in her growth as a character but I take it that we are supposed to be like her here, being lost and trying to absorb the new surroundings. I feel that the next issue has a very good opportunity to start really picking things up. Hopefully, it will as Vep continues to escape this nightmare.