Arcades are on the rise and I for one have my quarters poised and ready.

With the increase in popularity of all things retro, we are seeing specialty businesses that cater to the nostalgic in all of us. My favorite example of this new wave is the arcade, a place where adults with spare change can relive their youth and show off their skills. Whether it’s Barcade in Brooklyn, 1-Up in Denver, or QuarterWorld in my very own Portland, the classic cabinets have found their way back into the social arena and with that comes a whole slate of games that went unplayed upon release.

My favorite genre to pump quarters into has always been the beat ‘em up. The classic side-scrolling set-up is perfect to enjoy with friends and a majority of the games released often tied into movies or comics. In this vein, players were treated to one of a kind adaptations such as The Simpsons, X-men or Teenage Mutant Ninja Turtles and also games that would gain acclaim via their home console ports, such as Golden Axe. But what about the beat ‘em ups that were under-produced or didn’t get a lot of love? Around the country, in basements and bars, there are tons of arcade games that have spent years gathering dust, only now to be unleashed on the unwitting public. Put your quarters on the screen and call next game as we take a look at some overlooked arcade beat ‘em ups.

Vendetta, known as Crime Fighters 2 in Japan, is another great Konami brawler. Much like the Streets of Rage and Final Fight, Vendetta takes place in a dirty gang-ridden city that always seems to be under construction. Players take control of The Cobras, a group of street-toughs that bears a striking resemblance to the popular action heroes of the era (including Hulk Hogan, Mr. T, and Jean Claude Van-Damme). When a member of the gang is kidnapped by The Dead End Gang, it’s up to the four remaining Cobras to get revenge.

The most notable aspect of this game is the ability to hit the enemies when they’re knocked down. Believe it or not, this is something that had not been seen much in 1991. Vendetta was produced by Konami during a very prolific period for the publisher that saw other arcade favorites such as The Simpsons, Rollergames, and Teenage Mutant Ninja Turtles. Although the American version of the game was censored to remove any leather (due to its connection to S&M), the game is still worth a play if you and some friends want to throw punches as your favorite action heroes.

Wait, there’s a Dungeons & Dragons beat ‘em up?! That’s right, as Dungeons & Dragons rose in popularity it not only got its cartoon show but it also had its own series of arcade brawlers! Shadow over Mystara is the direct sequel to successful 1993 game Dungeons & Dragons: Tower of Doom. The series finds 6 heroes, all based on classes from the table-top game, on a quest to destroy the evil sorcerer Synn as she tries to awaken a powerful ancient being known as The Fiend.

In their second to last foray into gaming, Capcom blended the side-scrolling fighting of their previous games with the RPG elements that were common in their console games. Nearly all aspects of the game are taken directly from the source material, adding layers of references for players that also enjoyed the iconic table-top RPG. Players are treated to a variety of magic and attacks that are executed in a similar fashion to fighting games, with different button combinations performing different moves. Options for upgrades and items are also available in between levels, adding a great deal of strategy to a genre known for simplicity and action. If you’re in the mood for something a little different, Dungeons & Dragons: Shadow over Mystara is the game for you. 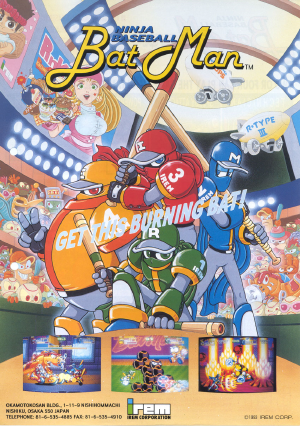 Ninja Baseball Batman is by far the most outlandish and entertaining game on this list. Developed during the first superhero boom of the 1990s, the game draws from America’s pastime to create a colorful and action-packed setting for a novel idea. All four characters have names resembling professional baseball players and each has their own strengths and weaknesses. The goal is to collect golden baseball memorabilia at the end of each level with the final treasure being a golden statue of Babe Ruth.

As the game was mainly developed for a Japanese release, Ninja Baseball Batman eschews the generic enemies of its peers by having some of the most insane villains I’ve ever seen. Enemies include Tommy-gun armed dogs called Gunslingers and Defending Slot, a slot machine gone mad.  This rare cabinet only had forty-three units sold in North America, making it extremely hard to find, so if you see it then it’s imperative that you try it out. Luckily I was able to play at a local Portland, Oregon arcade called QuarterWorld that has one of the only cabinets on the West coast.

In retrospect, Capcom was really on a roll in the 1990s when it came to arcade games. The busy publisher already had multiple hits for home consoles, including Mega Man and Bionic Commando, but they also dominated the arcades with smash titles such as House of the Dead, Street Fighter II, and Final Fight. With so much content and little space on the arcade floor, it’s easy to see how a smaller title like Cadillacs and Dinosaurs could be pushed aside. Based on the comic book series Xenozoic Tales and an animated series that shared a name with the game, the plot centers around your team trying to stop dinosaur poachers that have driven the dinosaurs to violence.

Cadillacs and Dinosaurs has four playable characters all with different abilities and strengths. Each character has use of special movies and also can pick up various weapons like flamethrowers and clubs. Unfortunately, you don’t get to ride the dinosaurs. Mostly they just show up in the background, do something helpful, and then quickly take off. The game places an emphasis on the different character abilities (speed, power, balanced, skill), allowing some replay value when using different characters. 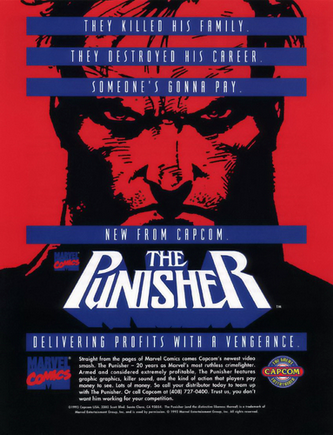 By far one of my favorite Marvel video games, The Punisher is a classic Capcom game full of references for comic fans. The standard mix of fists and weapons helps you take down wave after wave of enemies on the way to battle The Kingpin himself. A fun footnote of this game is that it is the first teaming of Capcom and Marvel, a pairing that would go on to create one of the more popular fighting games in the world.

As either Frank Castle or Nick Fury, players face a variety of bosses straight from the Punisher universe.  To stay true to the Punisher style, Capcom included the use of various guns that provide a quick and powerful way to dispatch foes. Well known villains from the 90s such as Bushwhacker, Bonebreaker, and Jigsaw make appearances, as do lesser-known antagonists like Chester Scully, Bruno Costa, and Guardroid. The Punisher was later ported to the Sega Genesis and has now become incredibly expensive and widely sought after. If you go to an arcade, The Punisher is definitely worth your quarters.

What are your favorite arcade games? What games hold a special place in your heart? Send me your recommendations and stories on twitter @TravisVertuca and stay tuned to the GWW for more video game fun!