Wreck-It Ralph is back in Ralph Breaks The Internet

First a disclaimer: I am either the very best or very worst person to review Ralph Breaks the Internet. As a superfan, I probably have a predisposition to want to love and hype it, but also as a superfan, I’m somewhat hyper-critical of points that would be irrelevant to a casual viewer.

At the risk of tipping my hand, I will lead off by saying while this is certainly not a perfect film (I don’t believe there’s any such thing), but if you enjoyed Wreck-It Ralph you may find this to be the perfect sequel to a film. Nearly all of the themes introduced in part one were extended and amplified in part two, but without doing the same thing all over again – a rare accomplishment for any sequel. And in the course of doing this, it corrects some of the problems I had with the first movie.

Before I get into the meat of that, though, let me set you at ease if you had the same concern I did leading up to RBTI. Much of what was highlighted in early trailers was very Disney-centric. There was a heavy focus on Disney properties in general (Muppets, Star Wars, Marvel, etc.) and on the Disney princesses in particular.

Disney princesses are featured briefly in Ralph Breaks the Internet

Now, I enjoy Disney as much as the next guy, but I was getting a growing sense that showcasing all this Disney stuff was going to either overshadow or dilute the “Ralph-ness” of RBTI. Rest assured, that is not what happens here. Despite trailer saturation, Disney is simply featured as one of many internet locations we visit. And the princess scene you pretty much see in its entirety in the trailers, is paid off by setting up what I will argue is the best Disney princess discovering-my-inner-dreams song there has ever been, or will ever be!

On to one of the many ways RBTI improved on its predecessor. In Wreck-It Ralph, once we get to Sugar Rush, the film pretty much spends all its time inside that one environment. There’s a whole arcade out there to explore, but after giving us a glimpse of that world, Vanellope’s racing game was pretty much the focus. Now granted, we had to deal with the Turbo situation there, but it always seemed a bit narrow in scope. Wonderfully enough, even though RBTI takes place in the internet (as the name implies), we get a much broader sense of what’s happening back in the arcade, in a few games, and even looks at real people outside the arcade as they control their avatars inside the internet. RBTI gives us a broader look at its universe, which as a result brings more of it to life.

This sequel also has matured its message and story over the first. It always bugged me a little that Wreck-It Ralph‘s moral was something akin to, “be happy with your lot in life, and don’t chase your dreams.” Acceptance is great, but that seemed a little stifling. The message in RBTI fixes that not only by being about chasing your dreams but looking at what can happen to a friendship if your dreams aren’t in alignment with one another. There’s also a distinct parental theme in WIR, where Ralph was required to do what he thought was best for Vanellope, even though he knows she’d hate him for doing it. RBTI extends that parental journey; this time tackling the heartache of doing what’s best for a child even if it makes you unhappy.

Are there any flaws in this sequel? Sure there are. As I said, I don’t think there’s any such thing as a perfect movie. Many beloved characters from WIR are sidelined in RBTI, and a few plot points are glossed over in the interest of getting to the story. Also, if you’re new to the Wreck-It Ralph universe, RBTI doesn’t waste any time explaining what’s going on with the rules of this world, so you’ll have to know them already or pick up on them from single lines meant to remind someone who should already be familiar.

Ralph and Vanellope in the internet

I’m not going to dive any deeper into story here, because while I’d love to gush over finer plot points, I refuse to spoil this for you or dampen your enjoyment of seeing how the story unfolds. Suffice it say that if you enjoyed Wreck-It Ralph, I have high confidence that you’ll enjoy Ralph Breaks the Internet even more.

Is this all starting to sound a little fishy? Am I a Disney plant who got payola to rave about how much I enjoyed RBTI? Nope, I can assure I am not. I was given the opportunity to see it early for the purposes of writing this review, but I paid my own cross-country airfare, hotel, and expenses to do so. And I don’t regret it one bit.

And when you do see it (not if, but when), be sure to stay to the very, very end after all the credits. There’s something there you need to see, and you’ll be glad you did.

If I could give Ralph five-and-a-half tokens, I would, but since the scale only goes to five, it gets all five of them. And like any good arcade game, you’ll want to use those tokens to replay Ralph Breaks the Internet over and over again.

What are your thoughts on Ralph Breaks The Internet? Let us know what you think in the comments below, and be sure to follow @GenXGrownup on Twitter, visit them at GenXGrownUp.com, on Facebook, and subscribe to their awesome YouTube channel for unique and enlightening videos covering everything geek. http://GenXGrownUp.com/yt 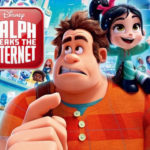 "You have to grow older, but you don't have to grow up." We're Generation X'ers who spent our childhood immersed in the music, movies, games, and pop culture of the late 70s & 80s. All of that stuff has shaped who we are today as adults. So all of those nostalgic things are still very much a part of how we live our lives & see the world in the 21st century.