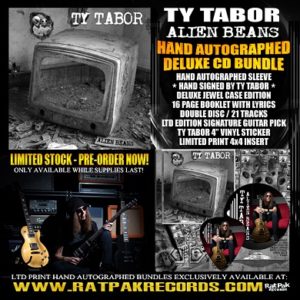 Regarding the new album, Ty comments, “I wanted to do a rock album and put some new, heavier stuff together. Along the way we also decided to remix some of the older stuff and make it a double album. Everything just fits together like it should. The whole concept behind the new album was to simply re-release a lot of my old catalog that was only available online and that most people didn’t really know about. Basically, my back catalog has kind of been hidden among the fans for a long time, but I didn’t just want to re-release the same stuff. A lot of times when you release an album you wish you could go back later and fix a little thing, or mix this differently, or whatever. Well, I took a look at all the old songs in that light and I did do some tweaking. I remixed some of it and I remastered all of it. But we didn’t stop there. We ended up spending a year writing a whole new album too and decided to put them both out together. So, it’s not just the old compilation of stuff that people know about, but it’s brand new songs too. Double album, old and new.” 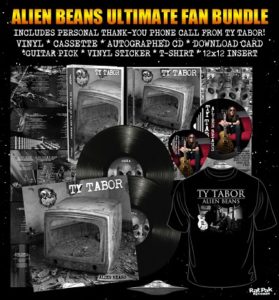 On the subject of song writing Ty states, “When it comes to what I write for solo material, I don’t really think about bands or anything like that. I just write music that makes me happy and I’ve ended up with an album I really love!”

With thought provoking lyrics, solid guitar riffs, and Ty’s signature sound, “Alien Beans” will surely resonate with all fans of rock music! Official release date for “Alien Beans” is January 12, 2018 and the album will be available in a variety of formats including vinyl, CD, cassette and autographed CD bundles which can be pre-ordered here: www.ratpakrecords.com/ty-tabor

Have you seen this:
Rumor: Alfred Molina Returns As Doctor Octopus in Spider-Man 3

DISC ONE] ALIEN BEANS, FREIGHT TRAIN, JOHNNY GUITAR, SO HERE’S TO YOU, BACK IT DOWN, SOMEBODY LIED, THIS TIME, HEAVILY TWISTED, UNTIL THIS DAY IS DONE, DEEPER PLACE

[DISC TWO] ‘CAUSE WE BELIEVED (BLAME IT), FREE YOURSELF, RIDE, SENSELESS PARANOIA, MONEY MOUTH, FAST ASLEEP, POLITICIAN’S CREED, PLAY, BRING IT ON BACK, NOBODY WINS WHEN NOBODY PLAYS, CHANGE