Razer’s Nari wireless gaming headsets come in three flavors, ranging from $99 to $199. They share the same overall audio quality, but there are some fun bells and whistles at the upper end that are optional. If you’re looking for a wireless headset, you can’t go wrong with Razer’s Nari line.

From the Essential Nari up to the Ultimate, the critical differences are less important than critical similarities. Each headset gets THX Spatial Audio, comfortable ear cushions, and good audio performance in games. The Razer Synapse software allows you to balance the sound the way you like it, or choose from various presets. I primarily use my laptop for gaming, so I kept the preset to Game mode and played several games: Battlefield V, Grim Dawn, Insurgency: Sandstorm, and Prey. What I noticed was the haptic feedback (exclusive to the Ultimate model) actually added to the overall experience of the shooters. While Grim Dawn did support haptics, I found it more intrusive than helpful, so I turned down the haptics from level 10 to 4, and it was more comfortable.

Razer included a few quality of life features that I adore: a retractile mic (Nari and Nari Ultimate only), transceiver dock (Nari Ultimate only) and easy access to the controls. Those controls include: mic mute, game vs. chat balance, power and overall volume. By putting volume on the right ear cuff, Razer acknowledges that gamers are more willing to take their hand off the mouse while in-game, rather than their keyboard. Furthermore, by separating it from all other controls, it’s easy to distinguish without having to manufacture some sort of physical differentiation. Well done, Razer.

It’s odd in 2018/2019 to see a high-end wireless headset leverage MicroUSB for charging. Particularly from Razer – a company that pushes the limits and gives gamers what they want. MicroUSB is a dying connection type, and it’s slower to charge than USB-C.

On the Essential model, the mic doesn’t retract from the ear cuffs. Instead it folds up and down. That’s purely an aesthetic difference, and one I would like to see as standard across the line of Nari headsets. I love how the Nari and Nari Ultimate look, and I’d hate to lose out on that attraction if I were to decide on a $99 budget or that I found Haptics or Chroma to be unnecessary.

The Nari headsets support consoles, such as the PS4, XBOX One and Nintendo Switch. However, the critical feature for dynamic sound is not supported outside of PC: THX Spatial Audio. I did test the headset on my PS4 and found it was still very good. The left and right channels worked appropriately as in-game audio moved across those channels. Haptics (Ultimate only) also work according to the last setting you programmed on your PC using the Synapse software. While playing on PC, I found the Haptics to be a little too distracting while playing Grim Dawn. But a quick alt-tab into Synapse solved that problem, as I was able to turn them down and could have turned them completely off. On console, however, the process is more involved. You’d have to reconnect the Nari to your PC and make the adjustment there. The Nari has excellent on-ear-cuff controls. It would be very cool if one could adjust the Haptics using these controls. I envision a function key, for example, that would act as Fn does on a computer keyboard.

This is nitpicking, but it’s still an area for improvement: notifications. After playing around with the Chroma lighting, I decided they were unnecessary since I couldn’t see them (the lighting appears on the outside of the ear cuffs). But then I realized that I couldn’t quite tell when the headset was on or off, outside of looking at my PC settings. By contrast, my Jabra Elite 5T wireless Bluetooth earbuds will chime a sound for on and another for off. It’ll also inform me if I’m connected or disconnect from a device. This is very helpful and I’d like to see it on the next iteration of the Nari.


Razer included a few quality of life features that I adore

The Razer Nari can be expensive, bu they start at an affordable price of $99. These headsets are not for the faint of cash but they cover the essentials: great sound, comfortable ear cushions, and controls that are easy to access and differentiate. Consequently, investigate the differences and know what you’re buying. Generally speaking, these are for gamers who frequently spend more than 60 minutes per gaming session and rely on comfort, clarity, and voice chat. 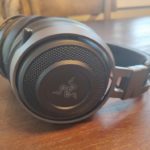