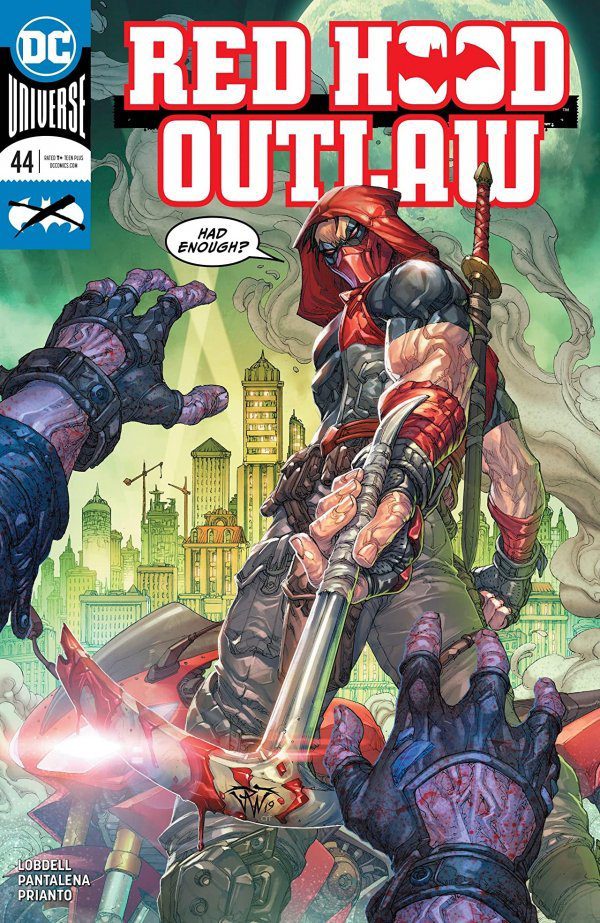 This is Pantalena’s second, for Red Hood: Outlaw (#42 was his first). If his cover doesn’t get you fired up for a big-time brawl, well, then nothing will.

Tan, on the other hand, has been around for a while. With the exception of Red Hood Outlaw: #39, he has been the variant cover artist since Red Hood: Outlaw #37. Tan has done an excellent job of capturing the Red Hood fans want — the merciless enforcer.

Pantalena was on the interior art for Red Hood: Outlaw #44, as well. His work with Artemis was his best throughout the issue. Whether it was fighting henchmen or quick scrap with Essence, Artemis had the best moments of the issue.

Because now we have a potential alliance forming between the Outlaws and Essence, with Isabel being in the mix. On top of the tension between Jason and Essence, now you have the three important women in his life getting involved. Scot Lobdell has set Red Hood up for some big-time time drama.

Now, if Lobdell could just unleash Pantalena so Red Hood can unload on The Untilted next issue, that would be great. Let Jason get whatever rage he has pent up out of his system before he has to deal with a major mess of his own creation.

Lastly, could’ve done without the Ma Gunn stuff. Hopefully the pay off is worth it.