Red Hood and the Outlaws #11 Review 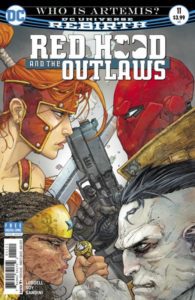 Artemis and Red Hood started on opposite sides of a war, but Artemis learns that her old friend is too far gone to save. The finale of the Artemis story arc ends with an epic battle.

I’m a little disappointed with the fact that Artemis and Red Hood never really fought each other. Akila said that it was General Heinle that had the Bow of Ra and was murdering his own people, so I assumed that this would cause tension between the Outlaws, since she actually had the Bow, but nothing happened. Akila jumps up with the bow and kills Heinle pretty quickly. Her reason for deceiving Artemis didn’t make much sense, and it felt like it was all for nothing. Even the big rematch between the Amazonian friends ended fast. It was all a little anti-climactic.

Putting that aside, it was an entertaining story arc. There was a lot of great action sequences, so credit to the amazing art team. Seriously, Dexter Soy is just phenomenal. Also, I like what Lobdell has added to the Amazonian mythos. This seems like the best time to push a story featuring an Amazonian. If I put in my conspiracy theory hat, maybe DC knew that Artemis showing up in the Wonder Woman movie might be the best time to highlight her in the comic books, so they delayed these issues till now. But they didn’t really promote this issue more than usual. 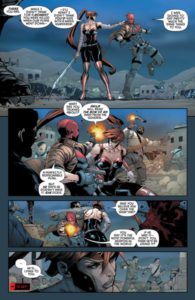 I actually think this book deserves more recognition than it has been getting. This volume of Red Hood and the Outlaws has been amazing and a far cry from the Starfire and Arsenal team that came off a little too dysfunctional. Speaking of Starfire, I was so happy with the way the female lead has been treated in this series. No over-sexualized poses, and no wanting to hook up with Jason Todd or Bizarro. At least, that was until the end of this issue where she has a romantic moment with Jason that felt so out of place. I won’t get too worried yet, Scott Lobdell has been killing it with the story. I just don’t want him to fall into old habits.

They might not have completely stuck the landing, but this creative team has been very impressive. Fun action and beautiful artwork make this issue a solid read.