Red Hood and The Outlaws #13 Review 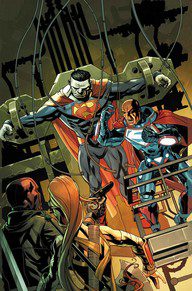 Previously, Bizarro managed to save his friends Red Hoot and Artemis from the clutches of Solomon Grundy but at a huge cost. He exerted his already deteriorating body and now it seems the only man who can save him is his creator, Lex Luther.

The issue begins on Bizarro’s perception on what he believes is his past. As a clone of Superman, it appears they are simply shewed visions of Superman’s history with Bizarro in-place instead of Clark. Dexter Soy and Veronica Gandini do a brilliant job and portraying this alternate reality of what Bizzarro may believe is true. In these visions, Bizarro’s innocence depicts others in his life as little adorable half-pint versions of themselves, this was a great substitution from separating fact and fiction. Dexter Soy’s unique take on these pages couldn’t have been any more perfect. Gandini’s colors perfectly compliment his work. I also have to mention the font transition in the letters, from Taylor Esposito, from Bizzaro’s thoughts to reality were well done as well. 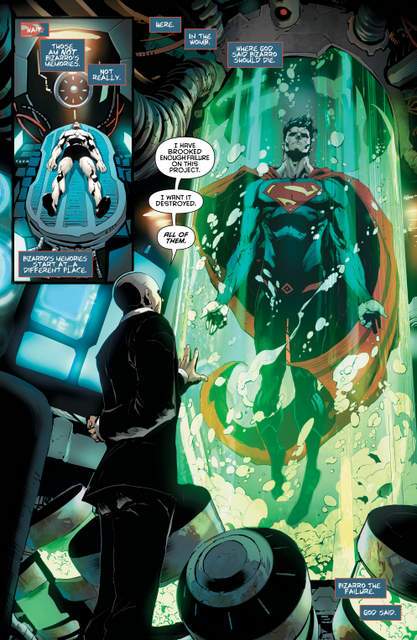 This issue’s circulates around the bond Jason, Artemis and Bizarro have for one another. These three bring out the best in each other. What also makes this issue, or even this run, unique is it’s ability to make Bizarro is such a likable character, which is something we haven’t quite seen before this run. The three share stories of their time together and how much each character has managed to grow in such a short time because of it. Jason shares moments of vulnerability, which isn’t touched on too often in the past, but Scott Lobdell managed to translate the emotions of these characters wonderfully.

Lex Luther’s involvement in reviving Bizarro is the biggest conflict the team faces in this issue as the Outlaws aren’t quite certain where Lex stands in all this, and if he has any ulterior motives. Lex’s dialog in this issue couldn’t have been better. It’s clear Lobdell understands the complexity of the character, and quite honestly, I’d love to see more of him during this run.

The art is fantastic, the writing is on par, I was consistently captivated throughout the entire issue, there was never a dull moment. Lobdell did a great job bringing out the compassion and emotions of each of these characters and onto the pages.

Red Hood and The Outlaws #13 is a great issue and quite possibly one of the best series to come out of Rebirth. I would highly suggest picking this one up. An absolute must-read series!

Not to mention the twist at the end of the issue was the icing on the cake. 😉