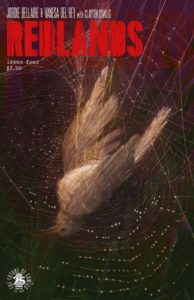 Bridget’s accident has left her not feeling herself, while we are introduced to two new characters that are close to the witches.

This issue really started to flesh out the supporting characters. We are introduced to Itsy, Roe’s spider daughter, who has a taste for scary stories. Much like Laurent, she appears to be a human created from an animal, something Alice doesn’t seem to like very much; perhaps a story for another time. I really liked Itsy, some of the things her and Roe discuss reminded me of the Addams Family. Where something scary and disturbing is spoken of in an endearing fashion. Her being cared for as a daughter leads to an argument that reveals something personal about Roe. The revelation was done well and didn’t feel like it was done for shock value which was a nice change. We are also introduced to Dani who seems to have lost a child, both she and Itsy show off a type of telepathic power in this issue which was a surprise.

Bridget doesn’t speak much and later it shows why. It appeared she was as good as dead in the last issue so something was bound to happen. Where this story leads is anyone’s guess. I’ve officially given up trying to figure out where this comic book is going in terms of story. 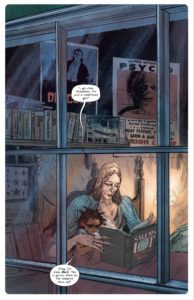 The great thing about Vanesa Del Rey’s art is that every new character has a new look. Sometimes we get a lot of archetypes in mainstream comics, so it’s great to see such diverse looking characters. The whole series has a great classic feel to a story that takes place in modern times. It’s fitting given how old the witches must be. Credit to Jordie Bellaire who is a very talented colorist on top of being the writer on this book. She adapts her style to any genre of a comic book so well. I especially like how Casey aka Casper consistently glows.

I like the characters, and the plot is always interesting. But I can’t help but feel like some of the focus was lost after the big death in the last issue. It’s great that Redlands continues to keep me guessing every month, but if there’s an overarching storyline in the series, I’m just not seeing it right now. Which could very well be the plan? I have without a doubt enjoyed every issue so far.

Have you seen this:
The Nice House On The Lake #6 (REVIEW)