Late last year, I reported that Marvel was bringing a new status quo to the Mutant citizens of the Marvel Universe with their next story line titled ResurrXion. Well, we now have a trailer from the House of Ideas that is full of 90’s kid nostalgia (Listen for the X-Men animated series music in the trailer.). It showcases the new titles coming to the X-Men this spring to your local comic book shop. 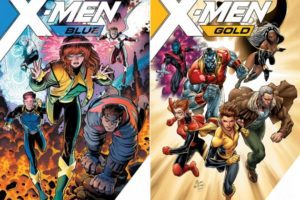 Along with the return to the era of two X-Men strike teams with X-Men Gold and X-Men Blue, there are new titles and teams being added to the roster. Many of the members will be getting their own solo books according to the trailer with Jean Grey getting her own title, X-23 featuring prominently in All-New Wolverine, Cable and Iceman all getting solo adventures in the universe. There is also the return of Generation X, Astonishing X-Men and Old Man Logan returning in two titles including a new Weapon X team.

In the wake of war with the Inhumans, the X-Men regroup for a new era of action and excitement! Experience the next bold chapter in the saga of Marvel’s mutant heroes and it all begins this spring in your local comic book shop.

ResurrXion begins with the launch of X-Men Blue and X-Men Gold this April.