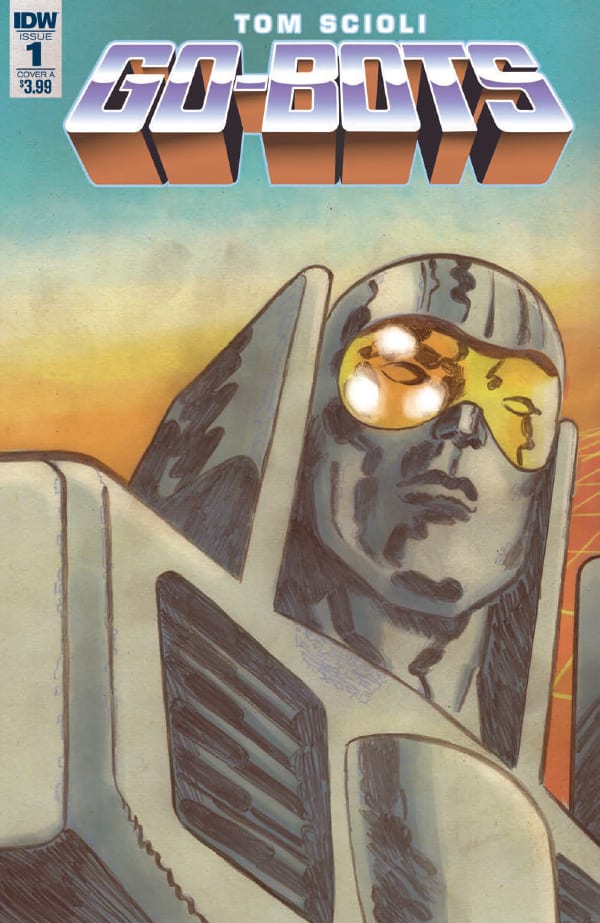 I remember Go-Bots when I was a kid; I watched Challenge of the Go-Bots, and Battle of the Rock Lords. I was probably the only kid in my neighborhood that was into Go-Bots. I remember battling Cy-Kill and Leader-1 Go-Bot toys out in my yard. But like everyone else, once Transformers hit the scene, I was less and less fascinated by Go-Bots. As I got older, Go-Bots were a fun footnote in toy history to bring up with other collectors or fans of Transformers. So, when I saw that IDW had a Go-Bots comic coming out, I was pretty excited to see a possible resurgence of the lore and line.

One of the things that really impressed me about this comic is that Tom Scioli did basically everything in this book, he wrote it, and did all the art, and also did the letters. Great job Tom. I do love the vintage feel that this comic has, like a lost relic of the early 80’s. The overall story laid out is very simple. Robots were made to make peoples’ lives easier, and some have decided to rebel. These Renegades want to control and even wipe humans off the earth. If I have read this kind of robot story once, I’ve read it a thousand times, so we aren’t winning a ton of creativity points. As I mentioned earlier, I do love the vintage feel of the comic, but It is hard to tell if it is written to duplicate the era or if the writer is just a very simple with his dialogue. Although it does seem to transport me back to the days when I may have read a brand new Go-Bots comic on the floor of my childhood bedroom, it is hard to take this comic seriously when juxtaposed with modern comics.

The art is the same way, a little more simplistic and heralding from decades ago, but where I feel the writing distracts from the overall comic, I believe the artwork ads to it. I’m in love with the overall look of this book. The simplistic background and panels bring a comprehensive and cohesive look to this book.

It honestly took me a bit to warm up to this book. Once I understood the direction Tom is taking the series, I appreciated it a little more. However, I don’t think this is a book for everyone, honestly, don’t think this is a book for very many people at all. If you love vintage comics, art, and stories, I think you’ll dig this one, or if you are a fan of the toys or cartoons from the 80’s I think you’ll also appreciate it.