Recently, a very good friend of mine purchased me the PlayStation 4 Mini Wired Gamepad from Hori. However, I’m sure a fair amount of you are thinking, “why would a grown woman need a game controller designed for kids?” Well, for one, I am a kid at heart, and two I have fibromyalgia.

Fibromyalgia is classified as widespread muscle pain and tenderness. In addition, the disease can cause joint pain similar to arthritis but without the breakdown of joints.

Since becoming chronically ill I have struggled to use traditional DualShock PlayStation controllers, particularly pressing down on the analog sticks. I have fairly small hands and while previously the regular PlayStation controller was manageable since gaining serious joint pain it becomes difficult. There were times I was pushing on the analog stick with the palm of my hand.

When announced the Hori mini wired gamepad was clearly advertised to children. The officially licensed product is 40% smaller than DualShock Wireless Controller and offers easier grip for those with smaller hands. The trigger buttons are significantly smaller on this controller and the analog sticks are easier to push in. More and more games have commands utilizing L3 and R3, often for sprinting or combos. This controller is easier to use if like me you have joint pain in your thumbs that are exasperated by continuously pushing down on the analog sticks.

Occasionally, I feel like I am missing part of a game because this controller doesn’t offer certain elements. For example, the horror game Until Dawn will often vibrate when the controller must be held still making it feel instinctual the player should move. Similarly, a lot of games use vibration to signal enemies nearby. While replaying Dishonored I missed the creepy, disembodied voices that used to emulate from my traditional Dualshock anytime I used a Void related power.

Nonetheless, I would not be able to enjoy games as much as I do now without this controller. This is a viable option for fellow gamers searching for a more accessible controller particularly if they have difficulty with joint pain, holding larger controllers, and if they are bothered by vibration. However, I do hope PlayStation, like Xbox, will focus more energy on creating more accessible options. Xbox’s accessible controller is much more customizable almost similar to their elite controller. The controller will allow gamers to connect external switches, buttons, mounts, and joysticks. Button, thumbstick and trigger inputs are controlled with assistive devices. In addition, the controller has multiple features designed for deaf gamers. 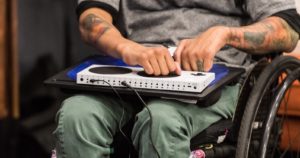 Currently, PlayStation has not released information on similar options. Overall, the Hori Mini Wired Gamepad is a good option for gamers who have disabilities that cause joint pain or would require a smaller controller. Until then, I am holding onto hope that more accessible controller options become available for PlayStation and all gaming platforms. Everyone should have the ability to enjoy gaming. The gamepad is available at most major gaming retailers for $29.99.