I’m not quite sure what to make of the Lenovo Chromebook Duet. Yes it is thin and light and it comes with a keyboard and a cover with a kickstand – all super awesome for just $300. On paper it should be able to compete with a Microsoft Surface Go or an iPad. The display is quite pretty at just over 1080P resolution across a 10.1″ size and it gets bright enough at 400 nits. But it runs Chrome OS, which has its place, but not when going toe to toe with other tablet options. So, pricing this at just $300 and including nearly everything you need is a brilliant move by Lenovo.

The Duet runs quickly when you don’t have too much running at one time. If you’re browsing through Chrome or staying in one app such as Microsoft OneNote or Word, you’ll be pretty happy with the performance. Once you load an application like Netflix, or Disney plus, then you’re also good to go in terms of performance. Switching between videos or browsing playlists is not slow at all. Again, provided it’s all you’re doing at that time. But if you’re expecting this to be a productivity device while you’re on the go, the limitations of its processing power and that it runs Chrome OS – you may find yourself wanting more. That will lead you to a Surface Go 2 or an iPad. Now in Lenovo’s favor, those are more expensive devices. And, frankly, in my experience those devices always left me unsatisfied and many times I returned or sold them to upgrade to the next level: a full fledged iPad Pro or a Surface Pro 7. Or even Surface Pro X that I’m using right now to write this review. At that point the devices are much to expensive to be in this conversation ($1,000+).

Now navigating through Chrome OS does take a small amount of time to get used to. I’d say I was used to it within an hour. I’m coming off of Android which may have something to do with it as the gestures are very similar. There are five key actions that you can take using your fingers such as going to the home screen, showing your pinned apps, viewing all open apps, creating a split screen environment, and going back to the screen you were on previously. Most of these actions start with a finger at the bottom and then swiping in one of a few different directions and either pausing or not. Simple and clean. 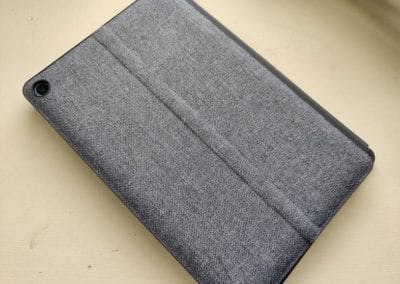 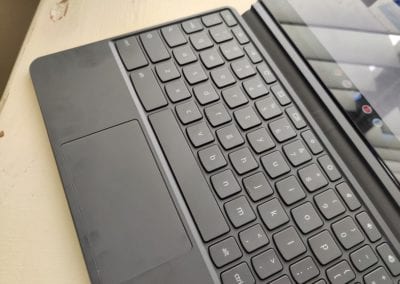 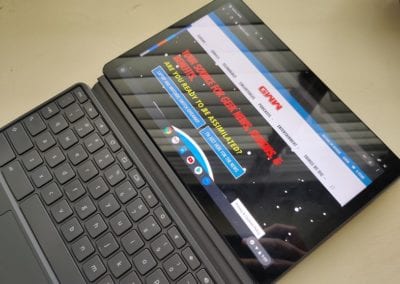 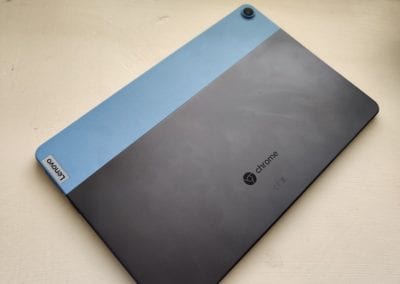 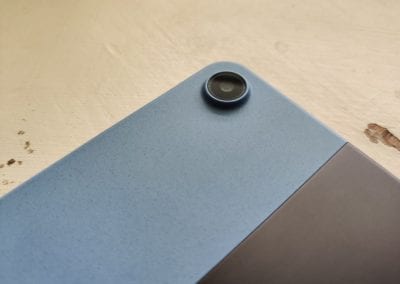 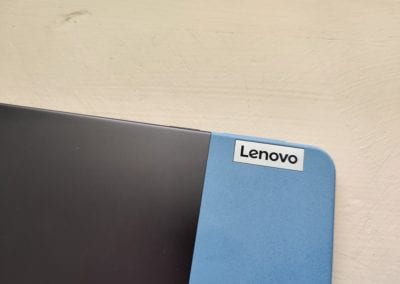 Yeah it’s portable. The duet is just .71 inches thin and weighs a hair over 2 pounds. That’s with the cover and the keyboard attached. Without them it’s just 0.29 inches thin and weighs a hair under 1 pound. It’s equipped with a USB type C 2.0 port for charging and data transfer as well as DisplayPort. It’s very easy to slip into a bag, although it won’t fit into your pocket. And if you want something that does that’s why we have smartphones. While you’re porting it around you can show off the really cool dualtone design which is a mix of what Lenovo calls Ice Blue and Iron Gray colorsaround its entire aluminum alloy body. Unlike CNC milled aluminium laptops, this is soft to the touch with rounded corners. Even the cover that it comes with is made of a really nice woven fabric that is gray.

What surprised me most about the duet is the included keyboard. First: I can’t believe they included it. Second: it’s actually really great to use considering it’s size. Compared to the keyboard on the Surface Go, it’s much better, even though they’re effectively the same size. Something else that surprised me is that this tablet will receive 8 years of OS updates. That’s a long time. As primarily an Android phone user I’ve been thinking more about updates and security than I ever have before. It’s something that makes the Apple ecosystem compelling. In fact, it’s the only thing that makes it compelling in my opinion. Somehow Google managed to open Chrome OS to a multitude of manufacturers while ensuring Apple-level security (anecdotally).

Finally, had Lenovo included an active pen, which is compatible by the way, it would have blown me away. The Duet is the perfect size for notetaking but without an included pen, I was not able to test it given the tech I have available to borrow from. My Surface Pro X pen is not compatible with the Duet. Regardless of my situation, taking handwritten notes and drawing are activities of the Duet’s target demographic: kids.

At a price of just $300, the octa-core CPU and 4GB may not surprise you, but the functionality and included keyboard may. The Chromebook Duet is absolutely perfect as a companion device to your laptop for entertainment and light productivity. And it’s absolutely perfect for kids. It is sparsely available at Lenovo.com and Best Buy.

tablet
Add your voice!Join the conversation on Discord...
Join Our Discord