Thank you to Lenovo for providing us with this review unit.

Even in 2017, there’s something about virtual reality (VR) headsets, like the Oculus Rift, that makes me feel like a child opening a NES on Christmas morning. Until this fall, we didn’t have a Microsoft-endorsed setup for VR that was accessible to the next set of consumers (previously it was early adopters). Microsoft partnered with their usual suspects to bring us Windows Mixed Reality (WMR). It’s a set of hardware standards for VR headsets and controllers. This month, I had the pleasure of using the Lenovo Explorer. It’s, of course, compatible with Windows Mixed Reality and also compatible with Steam VR. The Explorer, and other WMR kits, benefits from room scaling and motion controller tracking without the need for a transmitter. The glasses themselves have a transmitter built into them, and a simple setup allows you to establish your boundaries.

I spent the last two weeks with the Explorer. It’s my 3rd VR headset, which may not sound like much of a background but I definitely fall into the early adopter category. My prior, extensive, experience is with the Oculus Rift and PlayStation VR. I came away from both experiences feeling positive about the future of VR and also cautious. I firmly believe augment reality, not virtual reality, is going to have the stronger future. When you equip any of today’s VR headsets, it’s difficult for most people to stay in those worlds for long periods of time (greater than 60 minutes). Even still, to really feel immersed in the experience, one has to forget about the world around them. The HTC Vive and Lenovo Explorer have a room scaling option, albeit implemented differently, that provides the user with scan lines around their defined or perceived boundary. With the Explorer, during initial setup within the application Windows Mixed Reality, you walk around the area near your PC to draw and define the boundaries. Having these scan-lines is helpful and can aid the user in choosing to forget about slamming their arm into a bookshelf. I’ve done that, and it hurts. So, props to Microsoft for making the room tracing a standard function of WMR. 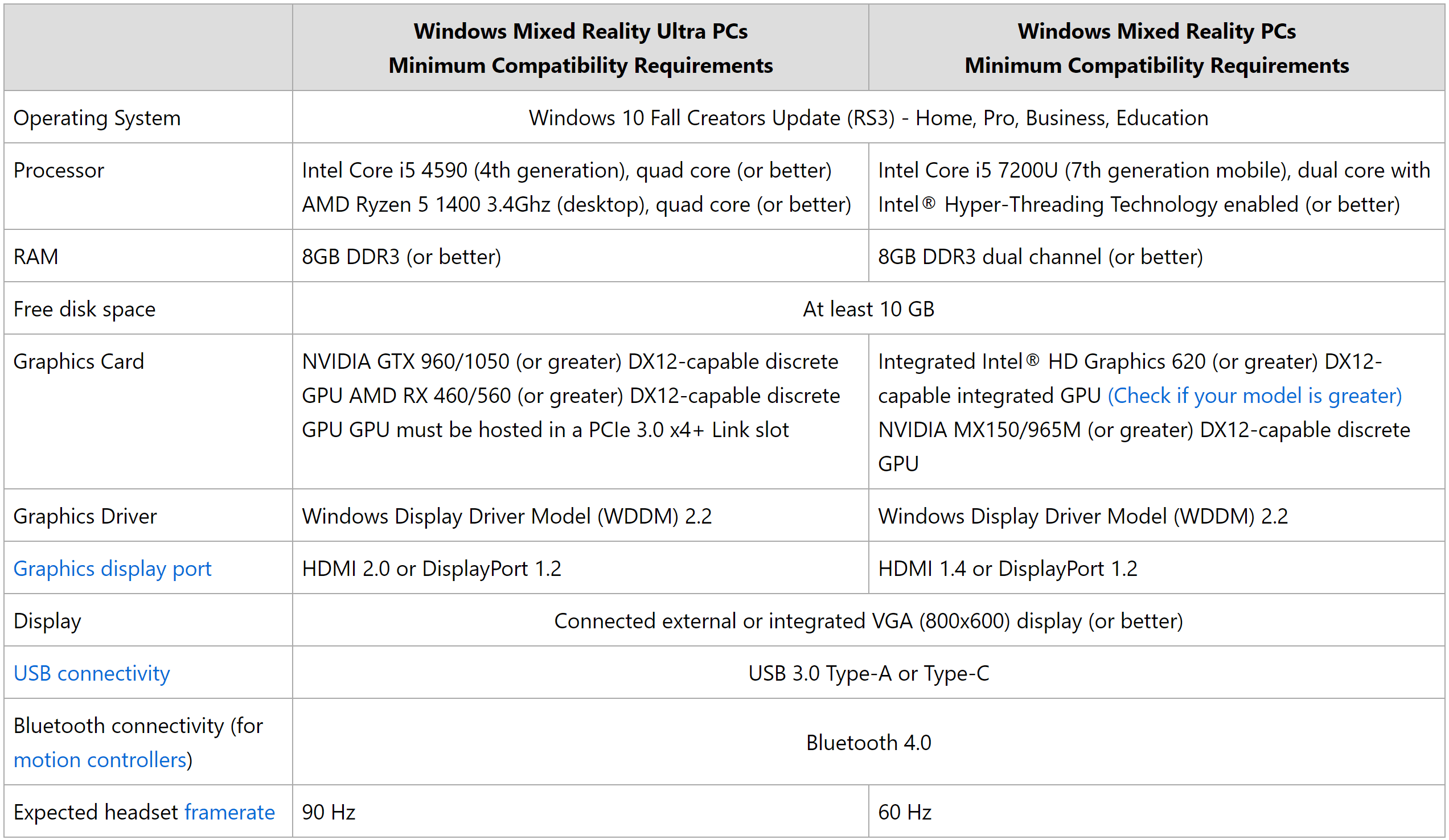 A quick note for you gamers out there. Windows 10 has it’s own lobby/store for purchasing games. I’ve seen a healthy library for sale, as of December, but I quickly installed Steam because that’s where more games are today, and will continue to release first. Also, from my time with the Oculus Rift, I had a small collection of VR games already in my library.

Getting up and running in Steam involves installing the Windows Mixed Reality application from the Steam catalog. It’s free and a rather quick download. Once you launch this application, you can run the standard Steam VR setup to access your library of games. In other situations where you have an environment within an environment, there are bound to be issues. But I am yet to experience any.

Until wireless VR headsets are a thing, actual comfort won’t be achieved. Even if you can tolerate the physicality of the headset (i.e. materials, adjustment points, and weight distribution), you still have to contend with the wires. With the Lenovo Explorer, video, communication and audio are handled with 3 wires. Since video and communication are initially joined by a y-cable, you have 2 cables to wrestle as you use the headset. Audio is not integrated into the headset. You will need to leverage your own, standard, 3.5 mm headphones.

Have you seen this:
Marsupilami: Hoobadventure (Review)

The mostly plastic Explorer affixes to your noggin with limited adjustment points. After you place it over your eyes from the top of your head, the housing for the lenses rest around your eye sockets and on top of your nose. Along the back of your head, you’ll rotate a small wheel that tightens the Explorer once you’ve found the most comfortable orientation. I intentionally wrote orientation to suggest there’s more to it than the vertical axis as it relates to your nose and eyes. You may also need to adjust the pitch of the lens housing (z axis). Also, in my case which may be rare, you may need to adjust the x-axis. That may seem strange but in a perfectly level x axis orientation, my right eye perceived the VR content out of focus. It took quite the juggling to make both eyes see clearly. I had the same issue with the PlayStation VR unit, which had more adjustment points so I was able to approach it with more precision. The Oculus Rift has even more adjustment points and I rarely experienced this issue. 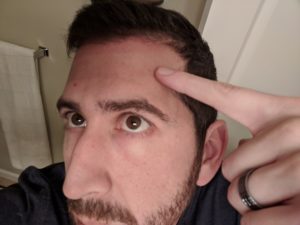 Caution: an intense VR experience with the Explorer may leave you with temporarily redness.

The motion controllers could use some work. The standard layout includes a Windows and menu button, two triggers (one for grip), an analog stick, and a small and somewhat awkward trackpad. The button layout is intuitive and feels good. Where I struggle is with the feel of the triggers. The primary trigger, located on the rear of either controller and activated with your pointer finger, doesn’t have a lot of bounce or spring. That means while playing a shooter, such as Doom VFR, you’ll more likely experience fatigue. This can be fixed with an update to the controllers, which operate over Bluetooth. Fortunately, since the issue is at the component level, it doesn’t mean you need an entirely new VR headset.

Naturally, I took a run at several games, from shooters to space combat games. I found the most enjoyment from a game I hadn’t played before: The Wizards. It’s a first-person experience where you use gestures with the controllers to casts spells, such as fireball, shield, and lighting. I wouldn’t recommend it for anyone brand new to VR. But if you’re comfortable with the VR in-experience navigation practice called teleport, you’ll be just fine in both The Wizards and Doom VFR. The latter was a letdown for me. Doom VFR is a standalone VR experience in the world of the latest Doom game (2016). The very best part of the game is wielding the iconic weapons. But you spend more time clumsily moving around than actually fighting. There is another in-experience navigation practice called locomotion. With it, you can walk around a VR world as you would a typical video game. But the several games I played with locomotion all were designed for the Vive controllers, which do not have an analog stick. Instead, it uses a click, round touchpad for many things, including locomotion. The games I’ve played don’t seem to support the analog sticks in the controllers designed for Windows Mixed Reality. This is a shame. Keep in mind, it’s still the early days of VR so these types of instances are expected. What may happen is a patch soon if WMR devices grab marketshare.

Have you seen this:
A BOY AND HIS BLOB (REVIEW)

What would be a great first-time VR gaming experience is Guns n’ Stories. It’s $10 (currently on sale for $5) on Steam and has no requirement for control-based movement. Instead, you can duck or stand while shooting down bad guys in a fictional, lightly steampunk 1800’s town. The narration reminds me of Call of Juarez: Gunslinger. That’s a good thing. It’s funny and accessible to many adults. It’s a shooting game, mind you. Don’t strap your 5 year old into it. I did use it as an introductory game for a few friends that I knew hadn’t yet experienced VR. Instead of freaking out about staring down a cliff side (my usual intro) they instead got right into the action.

If you have even the slightest desire to try VR, Lenovo’s Explorer is a great option. $399 is not a steep price for getting into VR. At this point, the early adopters have spent $700-$900 on their VR units plus $1000+ on a PC capable of taking advantage of it. The $449 Explorer price is not all that you need to get started. Unlike the PlayStation VR (typically $299 + $299 for a PS4), you also need a Windows PC. The minimum system requirements for VR will not net you the same experience I’ve had. Since I’m running at or above the minimum requirements for Windows Mixed Reality Ultra. If you don’t have the desire for the Ultra mode, it’s an achievement that you can experience VR with an ultrabook from 2016. Great work by Microsoft, Lenovo, and the other WMR participants to pull this together.