Thanks to Lenovo for sending us this review unit.

The X380 Yoga is a ThinkPad with a touchscreen display that is also a 2-in-1 that has passed MIL-SPEC certification. It’s durability and flexibility make it one of the most capable laptops available. It runs one the latest Intel CPUs with 4 cores and has Lenovo’s fantastic ThinkPad keyboard. There is another ace up it’s sleeve: a stylus that tucks into the right side of the laptop. I’ve taken the X380 through it’s paces for two weeks and found it to be reliable and comfortable to use. It’s not the most attractive laptop in the desk, and is a bit heavy for tablet use, but it gets the job done.

ThinkPad quality is found throughout the X380. The chassis is a black aluminum alloy with the ThinkPad logo and classic red light on the front of the laptop when closed. When opened, you’ll find the same fantastic keyboard that is in every ThinkPad. What makes the X380 different is it’s also a Yoga - meaning the display rotates 180 degrees and the laptop can be used as a tablet. There’s even a stylus tucked inside the chassis. It’s a full on tablet if needed; albeit with a little extra weight at just over 3 lbs. The hinge that enables this functionality is sturdy, and a contrasting silver color.

While testing the tablet mode several times, I noticed the hinge on the laptop to be excellent and sturdy. When it comes to 2-in-1 laptops, you can trust Lenovo’s build quality.

The keyboard has a backlight that was not very bright or elegant, but gets the job done. It also has a neat party trick: when you’re in a dark room, the backlight turns on. Nifty, and a feature I haven’t seen elsewhere. The display is bright with good color representation at peak brightness. When rotated, the display folds well into the back of the laptop. Simply pull out the stylus and you’re ready to draw or take notes. This is an active stylus, like the Microsoft Surface Pen. There are two buttons on the stylus that can be mapped to a function of your choosing. Although I wasn’t able to get it to work. I suspect there is a companion application that was not included in my demo unit. That doesn’t mean the pen isn’t useful. I’m not an artist so I can’t speak to it’s subjective precision or it’s usefulness in that area. I can tell you it’s comfortable to hold and use for the short periods I used it. Being light and thin makes it uncomfortable for long periods for my larger than average hands. 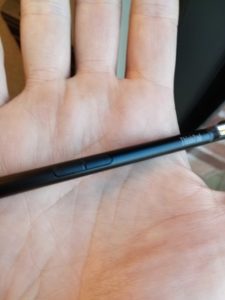 The biggest surprise I found with the X380 was the battery. I was able to get 10+ hours of battery consistently, day after day for two weeks. I traveled with it through a couple of time zones and appreciated it’s workhorse design. A tough chassis meets a hard worker. The X380 was able to achieve this without being wimpy. In tablet mode I was happy with the responsiveness of the pen, but the laptop itself is just too heavy for extended use in tablet mode. Instead of holding it like an iPad or Fire tablet, I perched it against my biceps and on top of my forearm. It was the only way I could functionally use it as a tablet, with the pen in my right hand. 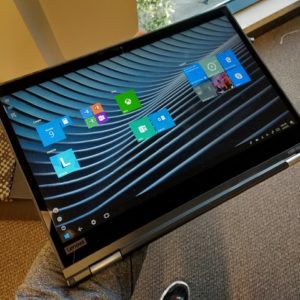 In my standard performance tests, which is a combination of office and travel scenarios, the X380 was right in line with other ultrabooks. I simulated my work funtions for these quantitative tests. Whereas the rest of my opinions were formed by qualitative tests. If you’d like a more scientific set test and benchmarks, you can find plenty of that around for laptops with similar specs. In the ultrabook or thin and light category, there isn’t much cooling that needs to happen, so performance doesn’t vary much between manufactures and models. I prefer real world tests, with laptop plugged in and the battery saver set to Better Performance. 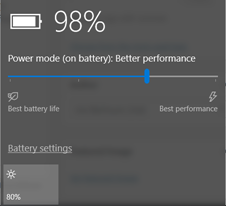 As a college professor and business traveler, the X380 is a good fit for me. I can articulate my opinion with a stylus and blank document/canvas and then hop on a plane and do my typical work in Microsoft Office. Some students may need this flexibility as well. Particularly if they are studying business or social sciences.