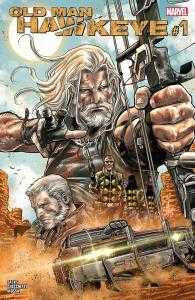 Set five years before the events of Old Man Logan, Clint Barton aka Hawkeye, is one of the last surviving Avengers. Mr. Hammer and Clint are ambushed by the Madroxes while on a mission - Clint takes them out in a flurry of arrows, but surprisingly misses the last Madrox. This leads Clint to visit Doctor Temple and she reveals the archer’s quickly losing his sight, motivating the former Avenger to seek revenge for the fallen heroes while he still can…

Old Man Hawkeye #1 wastes no time in diving straight into the raw action as the Madrox gang attack a shipment of mutant growth hormones Justin Hammer is transporting. Luckily enough Hammer has hired Hawkeye to protect the goods and effortlessly takes out the group in a no holds barred action sequence with arrows bloodily flying through foreheads, eyes, and cheeks! Thing is Clint misses the last Madrox shooting him through the shoulder, but Clint never misses right? Following a visit to Claire Temple, he’s faced with the shocking diagnosis that he’s quickly going blind due to glaucoma. She advises him that if there’s something he wants to see or do, to do it now…

Have you seen this:
Change My Mind #108: WandaVision Exit Survey

So Clint visits Logan’s farm asking for his help to get justice for their fallen heroes, but all Logan’s interested in is keeping his family safe. Clint then visits his daughter to say goodbye as he’s setting out on his revenge mission, but heartbreakingly she’s using his picture for target practice and really doesn’t care. The closing scenes set up some very interesting enemies that will be on the hunt for Hawkeye; the surviving member of the Madrox gang who gains a major upgrade and a very familiar assassin turned Marshal! 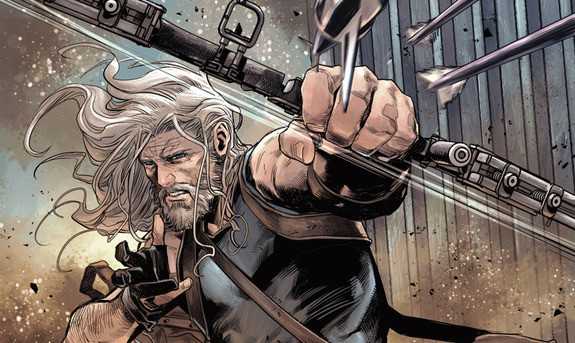 I absolutely loved the dystopian world that Mark Millar built in Old Man Logan – the idea that the World’s super villains finally united to bring down most of the superheroes was genius. So I was a little hesitant when they announced this prequel series but wanted to see more of this alternative future explored. But I’m happy to say that Old Man Hawkeye #1 is a fantastic new addition that’s packed full of action and easter eggs, setting up an intriguing story that’s just different enough from Old Man Logan. I loved how Sacks delved straight into the violent action in the opening, but then balanced the pacing of the rest of the issue with Clint visiting Claire, his daughter, and Logan - nicely building up the story and current world.

The art from Marco Checchetto and Andres Mossa is stunning and perfectly complements the gritty violence and wasteland from the Old Man Logan universe. The opening action sequence is so well drawn with arrows, bullets, and blood flying everywhere! The detail 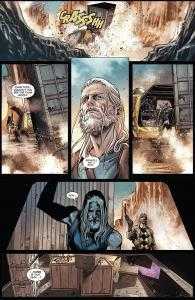 brought to every page is absolutely amazing and each of the characters are so well drawn. The splash panels are particularly impressive, especially the flashback of Clint holding the body of a dying Black Widow. I’ve got to give a shout out to colorist Andres Mossa who brings a wonderful grainy washed out fade to the panels.

Old Man Hawkeye #1 is a fantastic start to a promising twelve issue series featuring an intriguing story by Sacks, with some stunning dystopian artwork from Checchetto and Mossa. I’m intrigued to see where this goes following the reveal at the end and can’t wait for Clint to explore more of the alternative universe that I loved so much in Old Man Logan.