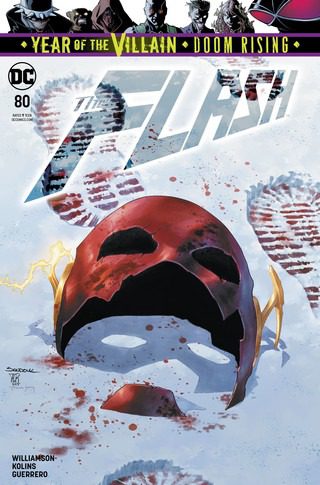 The Speed Force is dying and Barry is doing everything he can to protect the last two new force users, but Hunter Zolomon has other plans.

Zoom has kidnapped Steadfast and it is up to Barry to track down the villain and rescue the force user before Black Flash tracks them both down. Iris insists on coming with him and the two of them will have to dive into Zolomon’s past in order to find out what he has planned, the case he was never able to solve and the location where he is holding Steadfast.

At the same time, Wallace and Avery travel to the remains of Iron Heights in order to track down Trickster. When they arrive and sneak into the prison, they find a meeting of the newly empowered and reformed Rogues plotting their next move.

When Barry finds the shocking truth about Hunter, he and Iris race to the location only to discover that drawing the Black Flash is part of Zoom’s plan and it will take an unexpected sacrifice to stop him.

Williamson does a great job with this issue. Everything works in it from the plot to the pace. The dialogue is great and everything in this story moves in a pace that allows the reader to be both shocked and excited by what happens on the final page. It’s an unexpected moment and opens the door for some interesting storytelling to come.