Rise of a D-List Supervillain REVIEW 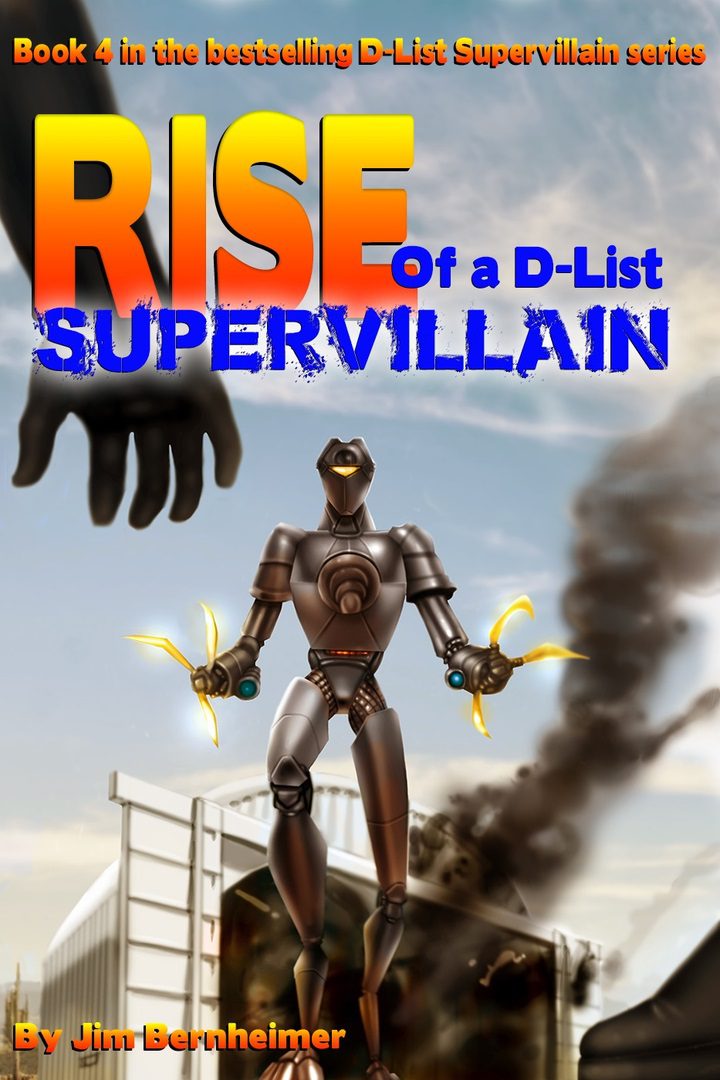 The citizens of the D-List world are teetering on the edge of the apocalypse (again!) and only Cal Stringel and his band of misfit Renegades can save the day. Jim Bernheimer’s wacky world where superpowers are real and hero/villain are occupation choices on LinkedIn, returns for more adventures in the fourth installment of his bestselling series. Rise of a D-List Villain may sound like an ad for Superpowered Viagra, but it delivers the fun, fast-paced, action which has served as the series trademark since book one. Though superheroes primarily exist in visual mediums, Bernheimer’s prose and vivid descriptions paint his characters as vibrantly as any artist on the canvas of the reader’s mind. If you haven’t picked up this series yet, I recommend you download them all at once. Like potato chips, you cannot stop after just one D-List Supervillain book.

This particular installment features protagonist Cal Stringel in hiding deep underground in his Alabama bunker. After a series of unfortunate events in previous books, the world believes him to be dead. Cal is a brilliant designer who can build radios from rocks but still manages to come across as a relatable every-man to readers. His long list of failures as both a hero and villain led him to previously faking his own death but saving the world all at the same time. In typical Cal fashion, he had to die in a nuclear explosion to gain any semblance of admiration from the public. As usual, Cal’s Big Lies return to bite him in the ass when an imposter claiming to be him washes up on the shores of the beach to claim his years of back pay from the Superhero group Gulf Coast Guardians and royalties from his best-selling book (See: Confessions of a D-List Supervillain) 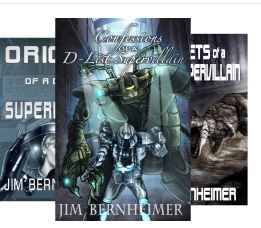 This wild adventure contains undercover infiltrations into the lairs of supervillains and wild mutations all compacted in a volume that I just kept wishing was longer. Bernheimer has put considerable effort into fleshing out an entire series that began as a short-story novella in a larger collection. At times, the story became so self-referential that I found myself wishing I had re-read the previous three books right before picking this one up, even though I’ve read them all multiple times in the past year. He also seems to have fallen in love with one of his creations, the Biloxi Bugler. The plucky southern hero did not appear in this particular book, but he was mentioned so often that I thought I could play a drinking game with Hillbilly Bobby and take a shot of tequila each time he was mentioned.

The story may feel disappointing at less than 200 pages and it was an added frustration reading on Kindle. I thought I had more to read but the last 30% of the book is a tease for another story. This was the literary equivalent to coitus interruptus when the book drew to what felt like a premature close.

I’m also lukewarm with the continued theme of Cal relying so much on dinosaur magic to solve his problems. I had the same feeling in the past volume Secrets of a D-list Supervillain and it only intensified here. The hook for Bermheimer’s flawed protagonist was that he was a tech-based character with expensive needs who constantly found himself broke. Cal’s use of dinosaur magic may provide a highly convenient plot solution for how the resourceful mechanic can carry on his elaborate mechanical operation on a shoestring budget. However, it feels too far removed from the ingenious engineer I grew attached to in the first volumes. Bernheimer does offer the tech geeks several moments of glee when Cal designed a makeshift power suit to fit his lizard form, but it did not have the same allure as when he scavenged to build the many versions of his Mechani-CAL armors in the past. 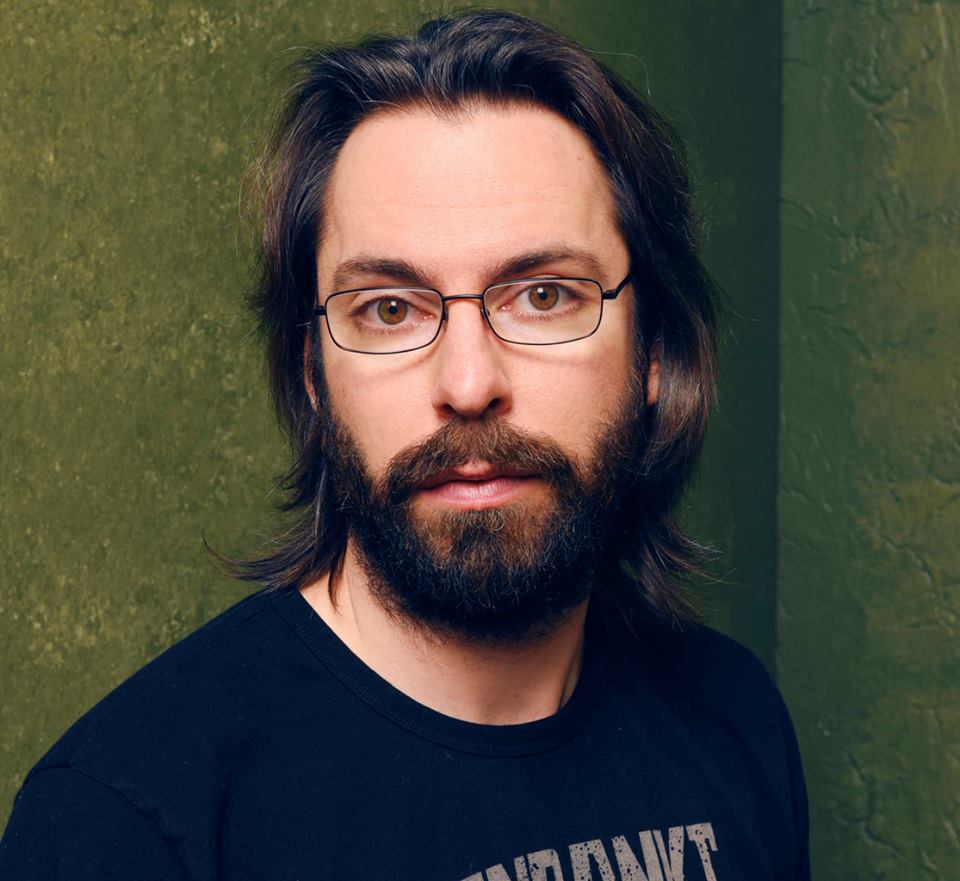 This volume also answered many questions about the foundations and origins of the D-List world. Most notably, it told the story of how superpowers became so relatively common. Some readers may hate the added exposition and prefer the superpowered world simply as the status quo with no need for further explanation. In some instances, less is more and fantasy fans will have no problem accepting this crazy earth at face value with characters like Tyrannosaurus Rex or 2K Bitchslap (which is a cooler name than NegaSonic Teenage Warhead!)

To me, the world building sections were compelling, but I also felt I had been “told” this epic story when I could have been “shown”. Cal’s hot girlfriend Stacy, A.K.A supermodel heroine Aphrodite, dumped the info all at once at the reader in scenes that felt jammed between her sexual escapades with Cal. Though that may just be my own jealousy speaking. I would like to know if Jim has an actor in mind to play Aphrodite in a D-List live action format. When I read I already picture Martin Starr (Silicon Valley, Knocked Up, Spider-Man: Homecoming) to play Cal in my mental movie, coming soon to a Nowhere Theaters everywhere!

If brisk, world-building, superhero prose is your taste, then the D-List universe is for you. The stories are shorter than I would like, but this seems like a deliberate choice by the author to capture a serialized comic-book adventure feel in a non-graphic novel. I will definitely be re-reading the entire series before I pick up the next entry by Jim Bernheimer and crew, which should be coming soon. In the meantime, check out the D-List Supervillain series: https://www.amazon.com/gp/product/B075719ZQX?ref=series_rw_dp_labf

If you love battling superheroes, be sure to check out my podcast with @JamesGavise right here on the GWW Radio Network: #WhoWouldWin? https://thegww.com/category/podcasts/whowouldwin/ Follow me on twitter (@JSandlinWriter) and read my other reviews and articles on GWW at www.JaySandlinWriter.com

jim bernheimer Novel rise of a d-list supervillain Superheroes
Add your voice!Join the conversation on Discord...
Join Our Discord