Road of the Dead : Highway to Hell #1 Review 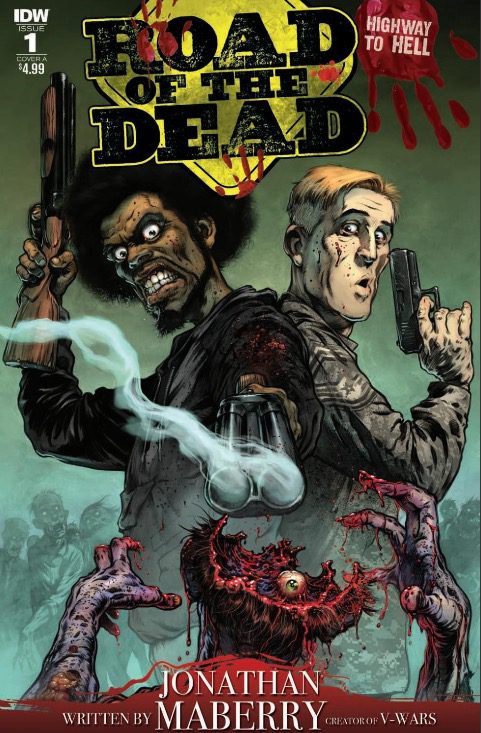 Road of the Dead: Highway to Hell #1
IDW Publishing

The Road of the Dead: Highway to Hell issue #1 is a fast-paced wild ride following soldier Steve Hanson as he battles the undead war. The comic is a prequel to George A Romero’s last movie Road of the dead and feels like a zombie movie meets the fast and the furious. George A Romero created some of the most iconic zombie movies and this issue feels an extension of his work. Written by New York Times bestseller Jonathan Maberry who understands the zombie lore with his previous work of V-Wars.

The first issue introduces us to a world of a ravenous plague of zombies having already taken over. Having returned from the war in Afghanistan, Steve Hanson is faced with a new type of war. The war of the undead. It’s violent from the start and doesn’t hold back on its language and gore in typical zombie style. Heads are seen getting severed with machetes, bullets fly through zombies brains and the F-word is said every other panel. I love zombie movies and George A Romero and it felt instantly like watching one of his classics.

The issue follows our war hero Steve battling the rising dead until he is saved by a gang of survivors on the run. Team leader called Shawn with dark and violent origin and young scientist Harriet carrying the answers to the plagues virus. It doesn’t have much originality but these zombie tales rarely do. Zombies rise, a cure can be made, humans fight for the cure, violence ensues. The main difference with this issue, however, is it’s writing and violent artwork. It feels alive, it feels like a moving horror movie and it sucks you right in.

The issue has a mad max style biker gang that can be seen chasing the survivors later on and a bloody battle is beautifully drawn in detail. Does it use the old questions that most zombie stories do in that in a world where the dead walk the earth: who are they ever real threats? It’s always the humans over the zombies and by the close of the issue, it is here too. I thoroughly enjoyed this issue and was a highly anticipating its release. It never dipped in its writing or artwork and I’m already loving the band of survivors. With the walking dead recently losing its main attraction on television, this is the watch to cure the undead blues. I highly recommend you pick up issue #1 of Road of the Dead: Highway to Hell. It’s wild, it’s mature and it’ll leave you wanting more.

drew moss jonathan maberry road of the dead
Add your voice!Join the conversation on Discord...
Join Our Discord