Road to Thirteen #2: The Eleventh Doctor, “The Steampunk Conundrum” REVIEW 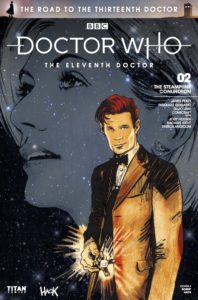 Have you ever wanted to see a Steampunk Dalek inspired dress? I haven’t, but now I know I did.  And that’s not even the best part! The Eleventh Doctor and Alice Obiefune land in San Francisco in the Nineteenth Century… and it’s filled with robots.

It’s an interesting short adventure where the robots were created by an alien race quite known to the Doctor. The robots destroy each other when they feel their ‘cover’ is compromised. Of course, the Doctor figured a way to use this to his advantage, and elicit a trigger from all the robots gathered in one place to mass destruct. Once they saw their master no longer in disguise, well… that’s history. 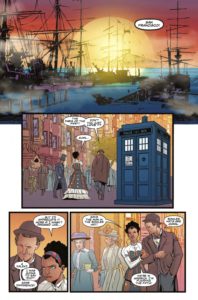 Considering many of the Titan Comics come in parts, it was nice to read a one-off story contained in one issue. Sometimes short adventures can be satisfying, and this one certainly was. Doctor quips, awesome companion moments, alien robots, and explosions all in one contained story.

The Road To The Thirteenth Doctor 02
Titan Comics

In continuing the short stories of individual Doctors leading up to the big reveal of the Thirteenth Doctor, we stumble upon a short with the Eleventh Doctor doing housework at the Ponds’ house, pondering how humans could possibly be content with living life “the slow way.” There was a hint in there that the Thirteenth Doctor could have been trying to interact with him via a wormhole that was visible for roughly two panels.

It was interesting to see a new take on that episode from Season 7a, where the Eleventh Doctor was “living” with Amy and Rory. I liked the expanse on the minute montage of him doing mundane activities, and what he was actually thinking in those moments.

I look forward to the “Road to…” with the Twelfth Doctor!

Doctor Who james peaty Jody Houser the eleventh doctor
Add your voice!Join the conversation on Discord...
Join Our Discord