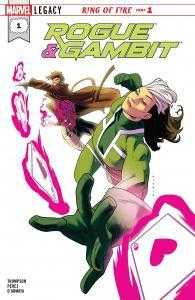 Everyone’s favourite mutant couple are back in this romantic comedy mini-series from Marvel! Kitty Pryde has sent Rogue and Gambit on an undercover mission to discover the truth behind the mysterious disappearance of mutants at an ‘idyllic private retreat’. But can the two put their differences aside and work together to save the missing mutants?

Following a beautiful double page splash featuring the titular characters, the action opens in Brazil with a trio of mutants on the run from a mysterious and hooded character. With a blinding flash of light, the three young mutants become passive and glossy eyed…Cut to a team of the mutants fighting old-school sentinels in a training sequence and I’m transported back to the classic X-Men! Cerebra has detected a large number of mutants vanish from a remote resort that caters for mutant couples, with the promise that they will “take away their trauma”. Who better to send on the mission than the X-Men’s famous squabbling on-off couple, Gambit and Rogue?! The two of them will be forced to confront their erratic relationship - this is going to be fun!

Disclaimer: Gambit and Rogue were my absolute favorite characters from X-Men: The Animated Series when I was a kid, so this review may be on the biased side! But I’m happy to say that this was everything I hoped for with a Gambit and Rogue team up; an issue full of quips, charm, sass and plenty of humor! You can tell Thompson has a love for these characters as they’re so well scripted; Gambit still lovingly calls Storm by her nickname Stormy, whilst Rogue still has her tough and sassy exterior. There’s so much electricity sizzling between the two characters, as well as a touching vulnerability - giving the characters a depth that they haven’t had for a long time. Thompson even manages to squeeze in a hilarious argument between the former lovers over Rogue kissing Deadpool! 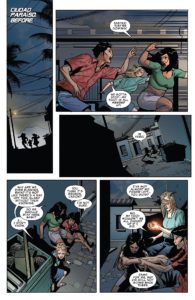 The art in this issue is also fantastic; Gambit and Rogue are brought to life immensely well by Perez, giving them a classic X-Men feel with plenty of detail. The bits of action we get in this issue looks great and D’armata colors are most striking in the training room panels, with the purple hues and the X-Men’s costumes really popping in that section.

Have you seen this:
Change My Mind #93: MCU Rewatch Vault - Captain America: The Winter Soldier

Gambit and Rogue #1 is a whole load of fun, which the current X-Men titles are missing at the moment, but if a little lacking in the plot! I’m definitely intrigued to see how the two get out of their hilarious predicament in the closing pages, so will definitely be picking up the next issue!