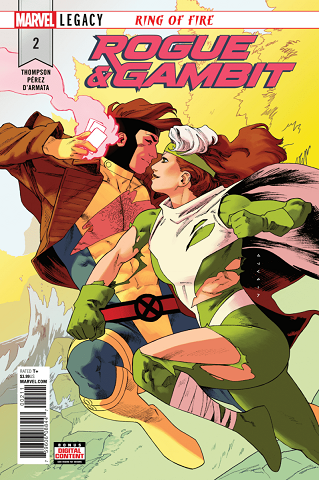 When I say this, know that I mean it with the utmost respect for Kelly Thompson. This series feels like fan fiction. But it feels like really good fan fiction because it feels like it because of the love and attention to detail she pays to the characters and their extremely convoluted continuity. Thompson knows Rouge and Gambit like the back of her hand and isn’t afraid to play in some of the deep cuts of their history together. And I have to say it is an absolute delight for a long time X-Men Fan. Now, this isn’t saying that this isn’t a comic that a new X-Men fan can’t enjoy because that is the beauty of it, it is! This is a book that has a ton of little inside jokes for longtime fans, but not in a way that will make newer fans feel self-conscious or out of place, or like you are missing a big piece of the puzzle. She’s able to walk this incredibly difficult tightrope of making X-Fans happy and not getting too deep into the weeds and scaring off people who don’t know every shred of X-Men history.

I’m not one of the people that came to the X-Men through the Animated series in the 90’s. But that did shape the way I view a lot of character, like Gambit and Rogue. Cause come on guys… They are meant to be together. I know time at retcons haven’t been kind to their relationship, but everyone knows it. So seeing them in a series like this is so incredibly fulfilling. This is such a delightful comic, have I mentioned how fun it is? Because it is very fun! 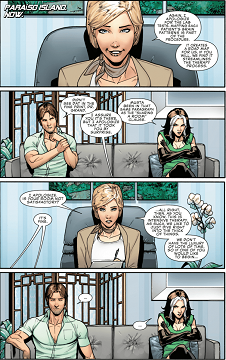 And let’s talk about this art! Pere Pérez is just killing it in this issue. Him and Frank D’Armatta, the colorist, play off of each other so well. The way they transition from the current story to flashbacks is so entrancing. It seems like Pérez was born to draw Gambit and Rogue. His panel layout is absolutely perfect, and the flow of the action is honestly breathtaking. I don’t think a more perfect creative team could have been assigned to this book.

In issue #1 we saw Kitty Pryde send the two heroes on an undercover mission to this island paradise where they do couples counseling. Of course, Their past relationship and baggage are the perfect cover for a covert operation to find out why mutants have been disappearing from the island. In this issue, we get to see their first session with a doctor on the island and watch as the two of them disagree on the first time they met. They also do some spyin’ but find a little more than they were expecting.

This entire book is filled to the brim with nostalgia and inside jokes for X-Fans but remains accessible for new fans. Thompson is masterful at getting the voices of the two mutants down. And the art is absolute perfection.

Anyone who likes X-Men will love this book, I’d venture to say anyone should like this book. I can’t wait to see what else they have in store for the mutant duo.