Rogues on the Run in The Flash #16 REVIEW 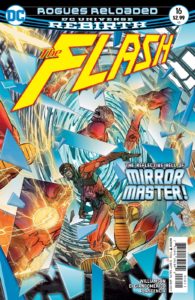 Barry Allen is the Fastest Man Alive, but even he can’t be everywhere at once. A lesson he learns the hard way following the aftermath of his encounter with Mirror Master. Heat Wave and the remaining rogues are on the loose in Central City and they seem to be coordinating their crimes in a way that Barry is finding harder and harder to keep up with. As he runs the streets of the city chasing clues, he invariably comes up empty. It might take the advice of a certain female reporter who’s caught his eye to help him look at the situation from a different perspective.

As The Flash finally starts putting the pieces together, he begins to understand the Rogues better and confronts Mick Rory at the ruins of his family home. A confrontation that doesn’t end the way the Scarlet Speedster was hoping. Or did it? The twists in this plot lead to a conclusion that reflects the growth of Barry Allen as a hero and investigator as well as an insight into the dynamic of the Rogues. 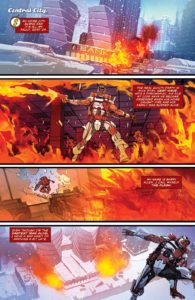 Joshua Williams tells a good story in this arc that sees a dynamic to Flash’s Rogues that is rarely depicted, the sense of family. The issue does a really effective job of not only emphasizing the menace of this disparate group, but also a level of vulnerability that makes it easy to understand why many of them have such a deep attachment to Central City.

Carmine Di Giandomenico’s art is dynamic and I loved so many of the panels in this issue. There is a fluidity to his work that melds perfectly with The Flash as a subject. There are moments like a hug between brother and sister that convey a sense of dynamic motion.