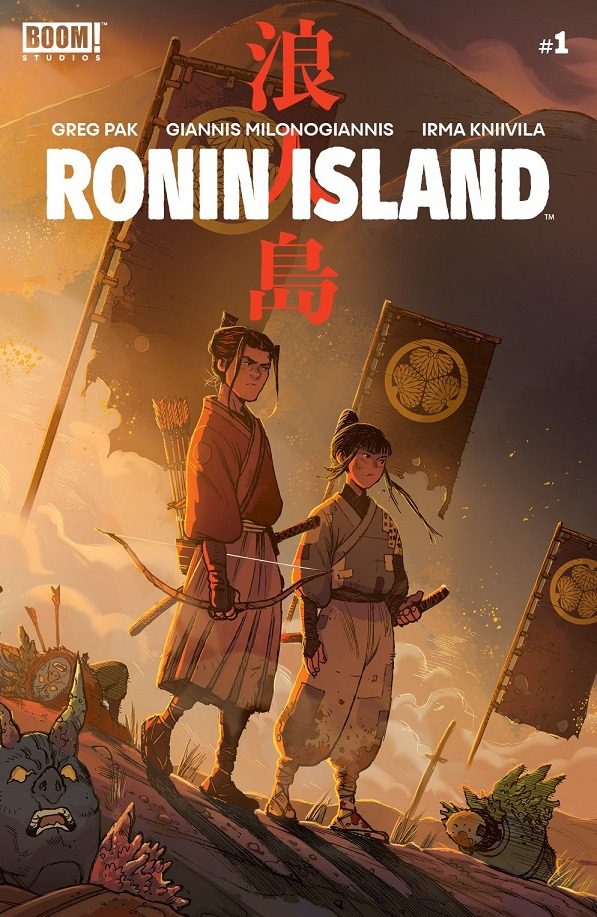 Ronin Island is about two teenagers who live in a village on an isolated island long after the Shogun have one. Kenichi and Hana though who live on the island have trained to be recognized as samurai warriors among the people as they get ready to compete against each other to prove who is the stronger warrior. Kenichi comes from a family who definitely seems to have a sort of name to carry as he is given his fathers set of armor. I enjoy this because it definitely puts a lot of weight on his shoulders as he clearly doesn’t want to disappoint his family and his father who is no longer with them. Hana is known as a girl from the farmer’s area of the island has a lot to gain from this competition.

The signals these two send-off is a bit of a mixed bag though on who you’ll end up liking. I do enjoy that Greg Pak is trying to break the mold here with this setting but I personally just didn’t find Hana that likable as she doesn’t show much drive outside of wanting to embarrass Kenichi. Kenichi has his reasons to win but is shown later to act a bit too hastily. It isn’t long thought that the two are ended up facing something much larger than what they could have imagined. With some of the groundwork laid out in this issue, I feel like the next steps we’ll see is seeing the two grow beyond from their somewhat selfish state. The way things are set up in the end does make it feel a bit rushed as I thought we would have had an arc where it was just focusing on the two as they work on becoming warriors to protect the island they live on, but there is still quite a bit to enjoy.

The art and coloring by Giannis and Irma do a great job bringing a very fun tone to the issue. What could’ve been another dreary story instead tries to give everyone a bit of soul with how they all try to look out for each other. The cartoony style may not grab everyone immediately but I found it to remind me a bit of the Avatar: The Last Airbender in terms of its tone. Characters don’t take themselves too seriously until they need to be and the book just sets out to try to be fun. Even though I didn’t find myself being taken by our two main characters, I still think this was enjoyable enough to continue into the next issue. Ronin Island can definitely grow to be something great as Kenichi and Hana set off to defend their home.