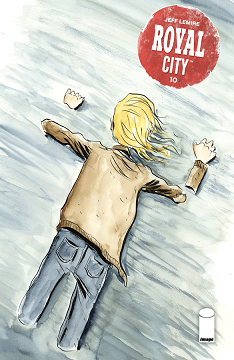 The new issue of Royal City #10 takes us on what seems to be our last adventure with Tommy before he passed away. We see him struggle as he continues to take his medication to fight these headaches that he’s consistently getting all in the while, he feels alone in the world. This theme continues on with Tommy’s mother, as she seems to feel like nobody really notices or cares about her. To me, it is also probably because she is unsure of how things are going to go with Tommy and probably would like her whole family to be together for as long as possible while they still have the ability.

I do really enjoy how Richie comes in to get Tommy out to go with him to a part instead of feeling sorry for himself in his room all day. Even though he doesn’t bother trying to watch Tommy after they get to the party, this can be seen as to him letting Tommy try to just get out and socialize on his own. Even with this large group around, Tommy still doesn’t feel like he’s wanted around. This kind of mentality along with his current health situation is something that could lead a person less caring about living. We see very little of Tommy really wanting to latch onto everyone in this town and he doesn’t seem to believe too much in the possibility of escaping into the larger side of the world. Our high point in the issue is towards the end as Tommy has his first experience in something very personal for everyone. I love the explanation of the scene and how it’s handled. It’s painted as an awkward, messy and confusing scene and the end just leaves a pit in your stomach.

This is the story of how some of these final moments for Tommy are truly sad. He has support from his family but no one seems to really try to talk to him, the same goes for Tommy as he barely speaks any words to even his own parents. Showing how much pain Tommy goes through is something many don’t talk about and that’s what I like about this issue. It shows how the pain is slowly tearing the family apart in all different directions.

Tommy was painted as the center of the reason why our characters end up the way they do as they never get over his death. In truth though, he was just as sad as everyone else. He just wasn’t sure how to find happiness anymore, which is why his family struggles now. Royal City isn’t afraid to show the pain that many people go through and that’s why these characters feel so real.