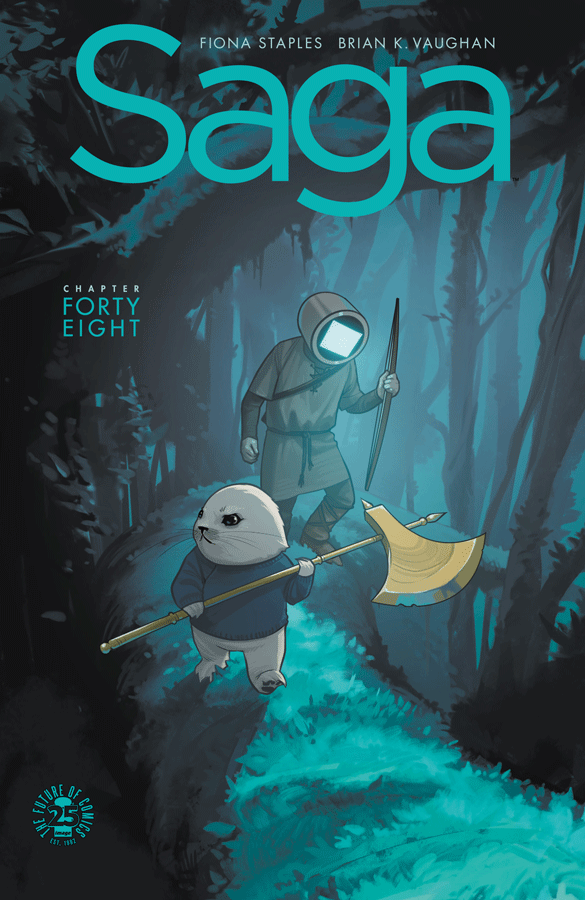 Fiona Staples and Brian K. Vaughn continue their winning streak with another beautiful entry in the Saga series. The story returns to a distant planet, focusing not on the main cast of Marko, Alana and Hazel but instead spending time with Squire, son of Prince Robot, and Ghus, the valiant ax-wielding harp seal. On the brink of starvation, Squire awaits the return of his father as he and his friends try to keep hope alive in a dire situation that involves the possible sacrifice of an old friend and a battle with an invisible beast. We are even re-introduced to Upsher and Doff, the reporters that are on a mission to expose Hazel’s true identity to the entire galaxy.

In this issue, we are presented with a tale that digs into the morality of murder and explores the father-son dynamic between Prince Robot and Squire. Tackling such heavy topics is no easy task, yet Saga continues to dazzle with the trend of meaningful storytelling told through clear and beautiful panels. By using their superb skills to end the current arc on a high note, Staples and Vaughn have given readers plenty to think about as Saga goes on hiatus until February of 2018 (I know, I’m sad too). What lies next for the gang? Will their quest for a normal life get on track? Looks like we’ll have to wait a while to find out.