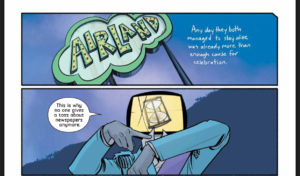 Saga #50 has us joyous to celebrate this landmark number for the series. It even starts off with Marko and Alana celebrating with each other as they’re off on a date. It feels like we get fewer moments of the two alone together now, but that’s the case when you’re a parent sharing a home with another family and couple. My favorite moment here is that it shows how much the two have grown together as a couple. They were runaway lovers that had fights and seem to be at so much peace even though they still have no real safe place in the cosmos right now. It makes you really root for them in hoping that when this series ends, they will all be living together as a happy family. 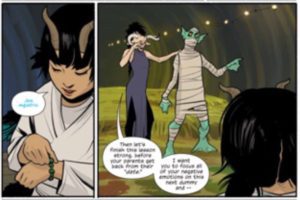 Later on, we see Hazel spending some time with Petrichor. I think it’s impossible to not love this character because she seems to really bring out the best in others most of the time, aside from what happened with her and Squire in the previous issue. We don’t really see anything continue from that little fallout but maybe that little argument will continue on between the two in a later issue. Prince Robot IV is still pushing forward to obtain new identities for him, Squire, and Petrichor. Even though he came to this decision himself without seeming to consult even Petrichor. You can’t look past at how he is truly believing that this is the best direction for them all to have new lives and away from all the crazy nonsense. It can be looked at as some sort of easy way out, changing yourself physically to be someone new. Prince Robot is more than likely tired of all the running and just wants to raise a family in peace and as long as things don’t change with the worlds at war, along with everything they have all been involved with. They may never have peace unless they take drastic measures.

Fiona Staples is so consistent with her work on the art in this series. The single splash page will certainly leave people something to remember along with a great nine-panel page, which is always nice to see once in a while in modern comics. The narration from Hazel has to be stale as she takes us through this story and it certainly doesn’t seem like its ending anytime soon.