Growing up people would always compare me to my brother. One of my high school teachers didn’t like me right off the bat because I have my brother’s last name. As we got older people assumed that wherever I went my brother would be there too. I share my brother’s DNA, we somewhat look alike, and we even share personalities, but at the end of the day, we are two different people. Salt and Sanctuary shares it’s DNA, its aesthetic, and its theme with Dark Souls, and even if they look alike, or even if Salt and Sanctuary plays like Dark Soul’s little brother, that doesn’t mean that Salt and Sanctuary is not its own entity and one that is worth getting to know.

At first glance Salt and Sanctuary is another Souls copy, but as you spend more time in this world, with the character that you get to build, you realize how deep and rich this game truly is. Salt and Sanctuary is a 2D Dark Souls platformer, but it takes everything that the beloved Souls series did right and makes it accessible for anyone to jump in and enjoy this hellish ride. The minute I stopped playing Dark Souls was the minute that I started looking for a game like it. Games like Nioh and The Surge try to add their own spin to the genre but they didn’t capture me like Dark Souls/Bloodborne once did. Salt and Sanctuary captured me from its opening act. You start off as a sailor that is shipwrecked, within the first 5 minutes you are fighting a boss that you have no chance in beating, and once you die you ascend into the dark world that Salt and Sanctuary brings to life. The sailor that you start off as is a character that you can build to your own liking. If you used to play Dark Souls aggressively or as a mage I suggest you build your characters like your Souls character, the skills that you learned in those game translate nicely to Salt and Sanctuary. 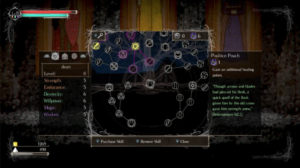 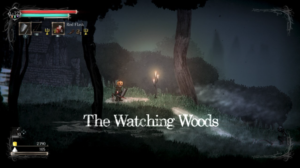 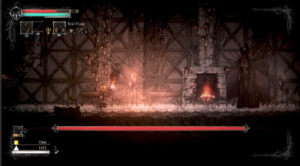 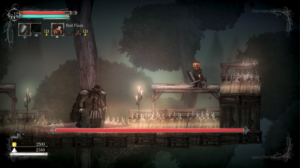 One of the reasons why I can’t stop playing this game its due to the bite-sized levels that it provides. In Salt and Sanctuary there is plenty of room for exploration but if you find a shortcut, ala Bloodborne, you can skip everything and fight a boss that will take you 3 to 5 minutes to beat. Like Cuphead these bosses are tough, taken that they are so short and so accessible I didn’t mind trying them over and over again until I beat them. The deeper I got into the game the more I wanted to play, the more obsessed I became with it. Salt and Sanctuary is scratching an itch that Dark Souls left.  The way you progress in this game is by acquiring salt and cashing that salt in a sanctuary, its very reminiscence of the blood from Bloodborne or the Souls from Dark Souls. Salt and Sanctuary gives me the freedom to spend my salt, however, I want it, I started my game as a hunter using a crossbow and a sword but now my character is using a broadsword with a shield. The extensive skill tree that this game provides will let you do as you please with your character. I feel like the skill tree gives out a clear description on what you are choosing to level up, unlike Dark Souls when a lot of the times I didn’t know what was the purpose to level up certain skills.

The game falters with some of the design choices that the developers make, for a game that its meant to mimic everything Dark Souls did, it felt silly at times. For the first couple of hours, my character was running around with a jack o lantern on his head, taken that it was the strongest headgear at the moment I had to wear it, but it felt silly slaying monsters that were supposed to be terrifying wearing that hat. As I was running around the different areas in the game with the silly pumpkin on my head, I found myself not taking the game as seriously as I would Dark Souls or Bloodborne.