Angels with Scaly Wings is a new visual novel / dating sim game from indie developer Radical Phi.  The game started its life as a simple programming exercise under the working title “Dragon Dating Simulator”.  After a failed attempt to crowdfund the game in this state, the developers decided to rework the game into something with a bit more depth than an average dating sim.  With a retooled focus and a new name, the game was successfully funded through an Indiegogo campaign.  Now, after two years of development, Angels with Scaly Wings is finally here! 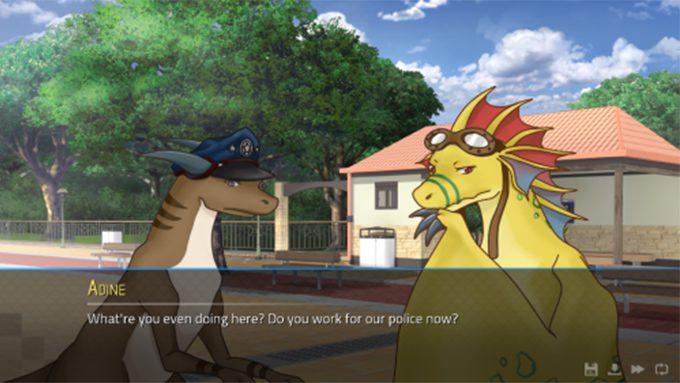 In this story, humanity has uncovered a mysterious structure which contains a portal leading to an unknown destination.  After a bit of reconnaissance, contact is made with people on the other side.  After communicating for a while, humanity decided to send a representative through the portal, a young man named Reza.  In his first report from the other side, he reveals that the people they have been conversing with are actually a race of intelligent, and seemingly peaceful, reptiles resembling what we would describe as dragons.  Their society and the world they inhabit seems much like our own, but they seem to have developed a clean, sustainable energy source.  A trade is brokered to provide the dragons with PDAs containing all our worldly knowledge in exchange for some of their energy generators.

You assume the role of the main character who has been tasked with delivering the PDAs to the dragons and, along with Reza, returning with the generators.  As you would expect, things don’t end up going as smoothly as you had hoped.  Reza goes missing and dead dragons start getting discovered over the following few days.  With no other viable suspects, you are tasked with assisting the police in locating Reza.  Along the way, you end up meeting a variety of interesting characters ranging from scientists to waitresses to video game developers.  In your free time, you can choose to hang out with the various dragons you’ve met.  Your interactions will affect your relationship with them.  Will they end up hating you?  Will you become friends or, perhaps, something more?  Of course, don’t get too distracted or someone close to you might end up becoming the next victim. 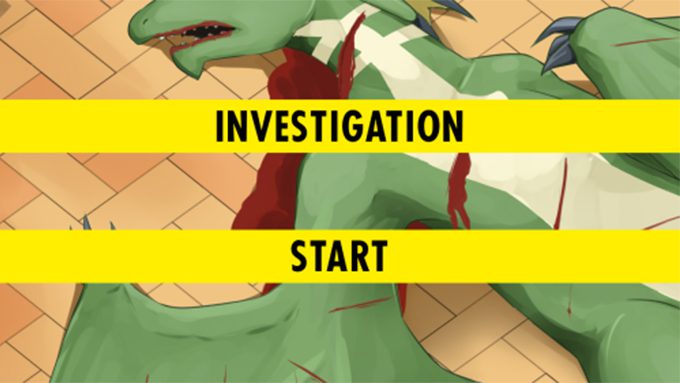 For the uninitiated, a visual novel is the video game equivalent of a “Choose-Your-Own-Adventure” book.  You follow along with the narrative and will, periodically, be given the choice of what your character says to other people.  Your choices may cause characters to become colder or friendlier towards you.  Some scenes may also task you with solving a puzzle in order to proceed.  These offer a nice break from all the reading.  At key points in the story, you will be presented with choices that will take the narrative along a variety of branching paths.  This means, every time you play the game, the story will unravel in different ways based on your decisions.  The game features an incredible and varied soundtrack, including the game’s title track which was composed by Shinji Hosoe (Naruto: Clash of the Ninja series, Zero Escape series and Ridge Racer 1 & 2).  Various sound effects and visual cues will also help to immerse you into the story.

In addition to the multitude of major and minor story branches, the game also boasts over thirteen different endings; some bad, some good and one hidden “True” ending.  There is even a creative reason given in the story to explain these repeat playthroughs.  Fortunately, the game offers fast-forward and scene skip options in order to breeze through portions of the story you have already witnessed in order to make it easier to explore different choices and unlock alternate endings.  Experiencing all of a certain character’s personal story will reward you with unlockable artwork.  Additionally, an assortment of in-game achievements will present completionists with a fun set of hidden objectives as well. 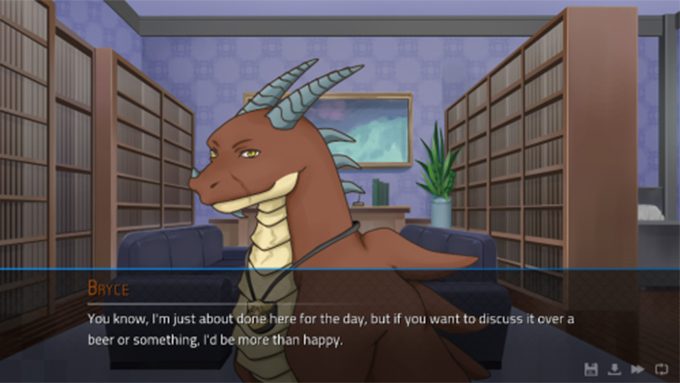 Angels with Scaly Wings is available now!  You can purchase the game digitally for Windows, Mac and Linux either through Steam or DRM-Free on the game’s website.  The game is available in a standard edition as well as a Deluxe Edition.  This premium version includes the game’s soundtrack (over 90 tracks!), concept artwork, desktop wallpapers and forum icons as well as a “Making of” PDF chronicling the game’s development.  You can find out more about the game on Tumblr or stay up to date on news about the game via their Twitter and Facebook accounts.