Have you seen this Kickstarter? Feb. 2017

Kickstarter and its generous community have brought the video gaming world some top-notch entertainment over the last few years.  Games like Divinity: Original Sin 2, Undertale, and Shovel Knight might never have seen the light of day without the support of gamers like you and me.  However, with the success of games like these, there are literally hundreds of people trying to make their game ideas a reality.  While high profile campaigns like Sundered, Banner Saga 3 and Sunless Skies need little or no introduction, there are some truly brilliant gems hiding amidst the sea of copyright-infringing remakes and people simply looking for handouts.  With this monthly series of articles, I hope to shed some light on a few of the diamonds-in-the-rough that need support from people like you.

Here are five such potential games-to-be with campaigns ending in the month of February 2017:

When Pixar’s Toy Story showed us what our toys do while we’re not watching, this inspired a multitude of stories related to the hidden lives of things like video game characters, pets and even food.  Skookum Arts’ new video game, The Pedestrian, has its sights aimed at the stick figures we see on restroom plaques and traffic signs.  The minimalist story revolves around a stick man who is trying to reunite with his beloved stick woman.  To do so, he will need to jump from sign to sign through doorways that link each surface together.  The path he must travel can be treacherous and wrought with pitfalls, so it’s up to you to guide him safely to his destination. 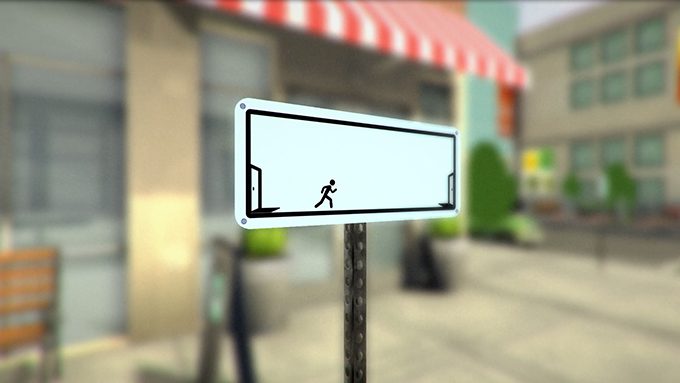 At it’s core, the game is a side-scrolling platformer with a focus on puzzle-solving.  As your stick man traverses each area, you will be tasked with connecting the doorways between each sign in order to create a sensible path to the exit.  Sometimes, this will not be possible in the signs’ default configuration, so you will need to change the position of the signs in order to allow for a clear pathway to be drawn.  Certain context clues in the surrounding environment may give you hints on how to approach a new concept or obstacle.  The contrast of the realism of the backgrounds and the bold, simplicity of the signs really makes for a visual treat.  If you want to get a taste of the experience, you can download the demo on the campaign page. 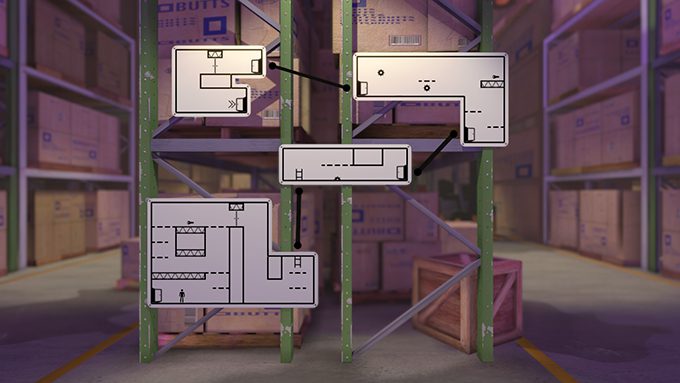 As of this writing, there is just under two weeks left to support this project.  The goal is within reach, but the developers will need your help to cross the finish line.  A digital copy of the game can be had for as little as $15.  A higher pledge could reward you with the game’s soundtrack, a digital art book, beta access or even a real, metal street sign featuring custom graphics based on the game!  The full version is planned for release in June of 2017 and will be available through a variety of retailers including Steam, Humble Store and itch.io for Windows, Mac and Linux.

We originally featured this game in our December 2016 review, but the campaign fell short of reaching its funding goal.  Fortunately, a generous benefactor has provided them with a large chunk of the needed capital, so they are now able to relaunch the campaign at a much lower goal!  For any newcomers, Legrand Legacy takes place in a land swept up in a seemingly endless war between two kingdoms.  To make matters worse, a prophecy claims that the world will soon be invaded by creatures from another realm.  You will assume the role of Finn, a former slave with a strong sense of justice whose promise to aid a young woman named Eris will lead to many new friends and even more deadly foes as they travel across the world in search of answers. 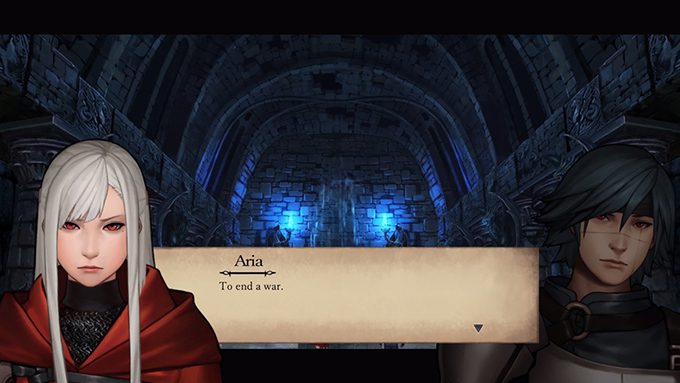 This is a Japanese-style RPG which boasts fully rendered 3D characters, beautifully hand-drawn backgrounds and gorgeous CGI cutscenes.  Battles in the game are turn-based, but feature the ACT system (Action Circle Tempo) which will reward well-timed button presses with increased offensive or defensive stat boosts while attacking or defending.  This makes battles more engaging than a tradition J-RPG.  The game will be bursting with side quests and is said to feature a robust crafting/alchemy system.  You’ll even be able to recruit NPCs to fight in your army or live in your stronghold to provide resources or bonus mini-games.  You really owe it to yourself to check out the playable demo on the campaign page.  Even in it’s pre-Alpha state, it is sure to impress. 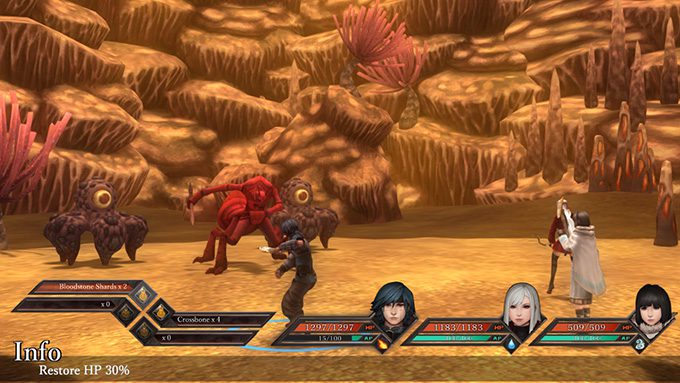 There are two weeks left and, while they have already reached 80% of their goal, they definitely need a strong push to cross the finish line.  A digital copy of the game will only set you back $18.  Contribute a bit more and you can get backer-exclusive weapons, beta or alpha access or even a physical copy of the game.  A sizeable donation can even get you a 3D printed figure of the main character, Finn.  The release window has been set for September of 2017 with the game being available through Steam or DRM-Free for Windows only.

The indie development team known as The Brotherhood wowed gamers back in 2015 with their crowdfunded adventure game STASIS.  Now, the Bischoff brothers have returned to Kickstarter for their newest, and most ambitious, video game project titled Beautiful Desolation.  Set in Africa during an alternate version of the 1980’s, humanity’s scientific and technological prowess grows a thousand-fold due to the sudden appearance of a floating monolith dubbed The Penrose.  Regrettably, this boon of knowledge and power is quickly used for war causing much of the world to be torn apart in the aftermath.  Welcome to the post-apocalyptic world of Beautiful Desolation. 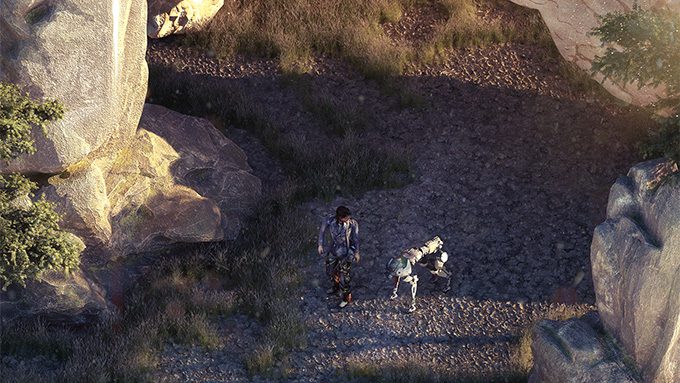 While the game is presented from an isometric viewpoint, it is not an RPG.  This is a point-and-click adventure game focused on the story of two brothers, a scientist and a soldier, traversing the wasteland of the African landscape in search of survivors and salvageable technology.  They will be accompanied by POOCH, a robotic AI dog that will provide advice and information during their journey.  The game’s African setting and retro-tech aesthetic really make for a unique experience.  To further enhance the game’s visuals, the developers are using photographs and miniatures to create strikingly realistic characters and environments.  To get an idea of how the game will play, check out the completely free adventure game CAYNE which is set in the universe of their first game, STASIS.  You can find a link to this proof-of-concept on the campaign page. 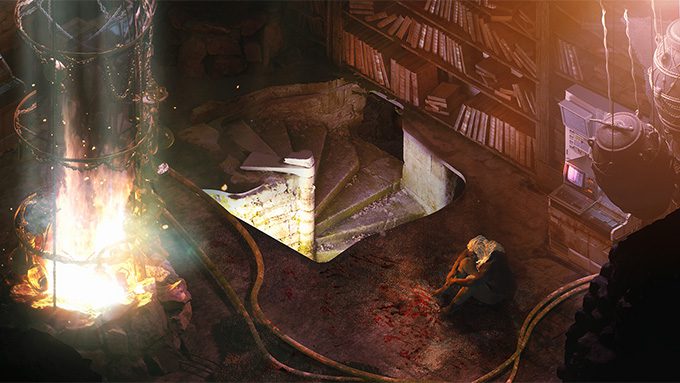 Just over two weeks remain to back the project.  At about 60% funded, they need a significant surge in support in order to meet their goal.  Pick up a digital copy of the game for as little as $19.  Higher tiers are offering standard or deluxe copies their previous games as well as a physical copy contained in a collector’s edition box with the game stored on a USB-Flash drive in the shape of a cassette tape.  The game is planned for an October 2019 launch through Steam or DRM-Free on GOG for Windows only.  Mac and Linux versions will be available in the following months.

This game is based on the tabletop role-playing game of the same name.  The pen-and-paper RPG, funded through Kickstarter, applies the cosmic horror of H.P. Lovecraft’s Cthulhu mythos to a typical high school setting.  The game takes place in and around the Occultar Academy, a school located on an island that teaches black magic and the occult sciences.  Isolating the school from the mainland helps to ensure that any mishap or accidental summoning of an elder god can be minimized or, at the very least, contained.  Of course, the students aren’t the only ones dabbling in the dark arts; the administrative staff are also involved in mysteriously macabre machinations as well.  Getting detention might just be the least of a student’s worries. 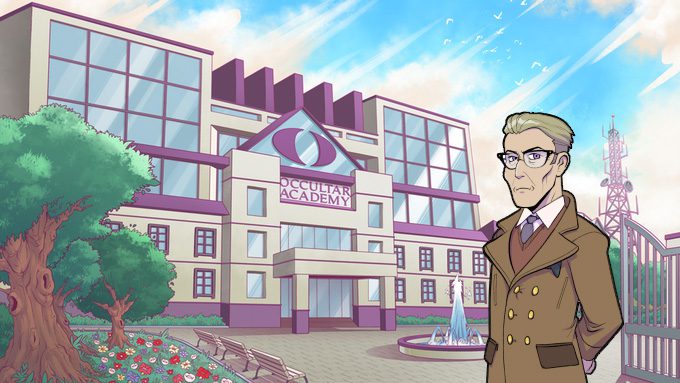 Breakfast Cult: The Visual Novel follows the exploits of “Pinky” Pinkerton, a former student of the academy who was expelled for being a trouble-maker.  As Pinky, you’ve been given a second chance, but you’ll have to tread carefully as the headmaster is watching your every move.  The gameplay will be understandably linear, but the story will branch out in different paths based on your choices and how you treat your fellow classmates.  In addition to the main narrative, you will have to manage your time during free period by deciding what to do, where to go and who to hang out with.  Improving relationships with your classmates could be beneficial…or it could lead to getting stabbed in the back when the going gets tough.  Can you unravel the mysteries of the school and still make it to graduation without getting expelled or…killed?  The choices are yours. 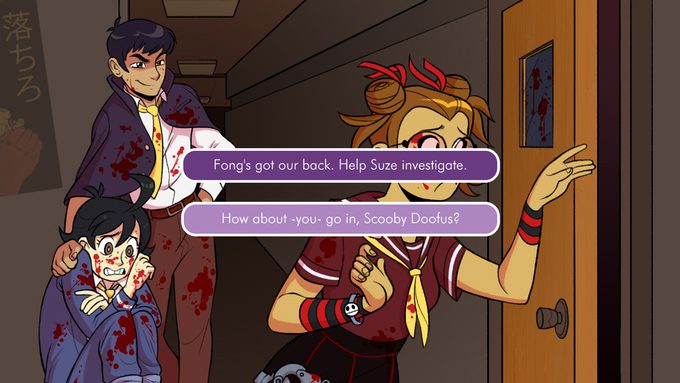 Two and a half weeks remain to show your support for this campaign.  They’ve only pulled in a quarter of their goal thus far, so spread the word to Cthulhu fans everywhere!  A donation of $15 will get you a digital copy of the game.  Pitching in a bit more could get you a PDF of the RPG sourcebook or even allow you to create a character to be featured in the game.  The developer is aiming for a December 2017 launch window.  Upon release, the game will be available through Steam or DRM-Free on Windows, Mac and Linux.

Cryptozoology is the study of creatures that are either believed to be extinct or originate in folklore.  These beings, known as cryptids, include such notable creatures as the Loch Ness Monster, the Chupacabras and the infamous Bigfoot.  While it is not an officially recognized science, there are still many people in the world that believe in its claims.  Brave Mule, the developers of this game, are no strangers to mythical beasts thanks to their two previous projects; The Domovoi, revolving around Russian folklore, and Beneath Floes, which focused on the tall tales of the Inuit people. 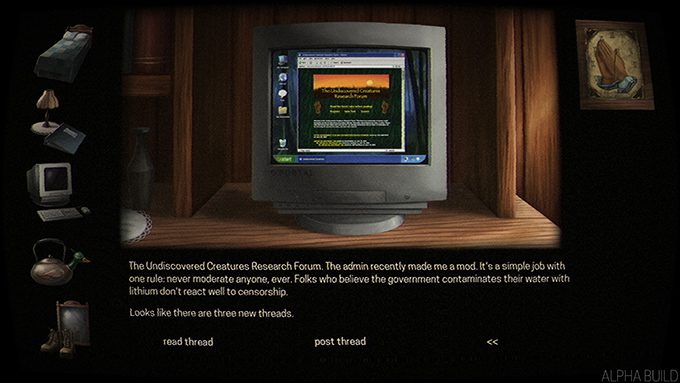 Southern Monsters is a point-and-click adventure game that takes place over five days in the summer of 2005 in Southern Arkansas.  The story centers around a young teen who is a moderator for a cryptozoology forum under the username cripplefoot.  Current online chatter says there is a monster roaming near the creeks not far from their home.  As cripplefoot, you will have to gather clues and search for evidence of the creature.  You’ll also have to make sure to keep yourself fed, so be sure to pack a bag of pork rinds and some marshmallow pies for the road.  If you’re a believer and you enjoy text adventures, then Southern Monsters is the game for you. 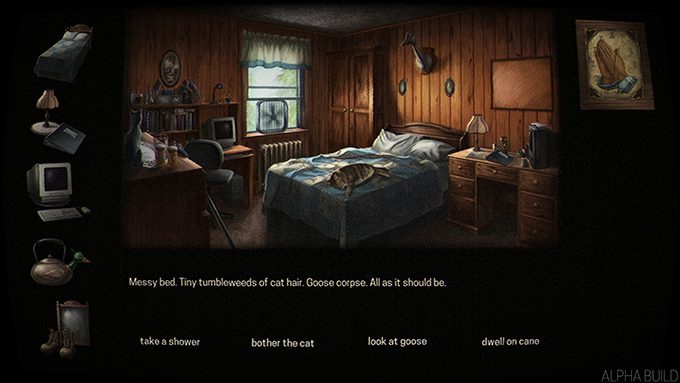 This campaign has reached nearly 90% of their funding total and they still have three weeks left in their campaign.  Your support is still important as it will allow them to achieve some stretch goals such as bringing the game to mobile platforms.  You can grab a digital copy for just $10 or bump it up to $15 to get the Special Edition which includes the soundtrack, art book and a digital novel.  Higher rewards include physical swag such as stickers, buttons, posters and even a printed copy of the bonus novel.  The game is planned for an October 2017 release for PC and Mac either through Steam or DRM-Free on itch.io.

Of the games I featured in January, Stardrop, Unknown Realm, and Super Red-Hot Hero all successfully met their funding goals!  Unfortunately, In the Line of Fire and The Tale of the Ice Staff were not as lucky.  In fact, it seems like both projects are being completely shut down.  It is such a shame to see promising projects die.  This is why your early support is so important.  As always, if either game resurfaces, I will be sure to let you know.  Until next month, happy gaming!