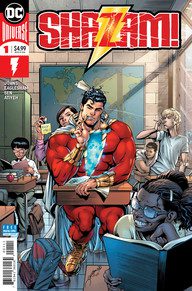 After a five year hiatus, Geoff Johns has returned to the world of the Big Red Cheese. Following a quick refresher on how Billy got his powers, we see the Shazam Family thwart a museum robbery, highlighting how much fun the kids have fighting crime and having superpowers. After eating dinner with their foster parents, the kids race upstairs go through the closet to the Rock of Eternity. There they discover that a new room has opened up, leading a trolley and system of railways. They see a map on the wall, showing all the magical lands they can travel to using the trolley. Freddy quickly grabs the switch to turn the power on. At the same time, there is a knock on the front door of the house. Billy’s foster parents open it to see a man claiming to be Billy’s biological father.

The five-year wait for more Shazam comics was totally worth it. The amount of fun I had reading this issue was immeasurable, which is exactly what I wanted to see. Geoff John’s ability to balance all six children and make each one have a different personality and give them depth in just a single comic book is astonishing. I was concerned that giving everyone powers would take away from the uniqueness and overshadow Billy as Shazam, but I couldn’t have been more wrong. While it was mostly set up, the heart in this issue is exactly what a Shazam comic should have, and the story going forward might be one of DC’s best in years.

Dale Eaglesham’s art seemed too detailed at first. I was hoping we’d see something more along the lines of Doc Shaner’s art, but I was wrong about this too. Eaglesham perfectly captured the magic of, well, magic. It was bright and cheerful, just as it should be.

Shazam #1 is one of DC’s best comics in years, with Johns writing at his best and Eaglesham nailing the profound color and cheesiness that a book like this should have.