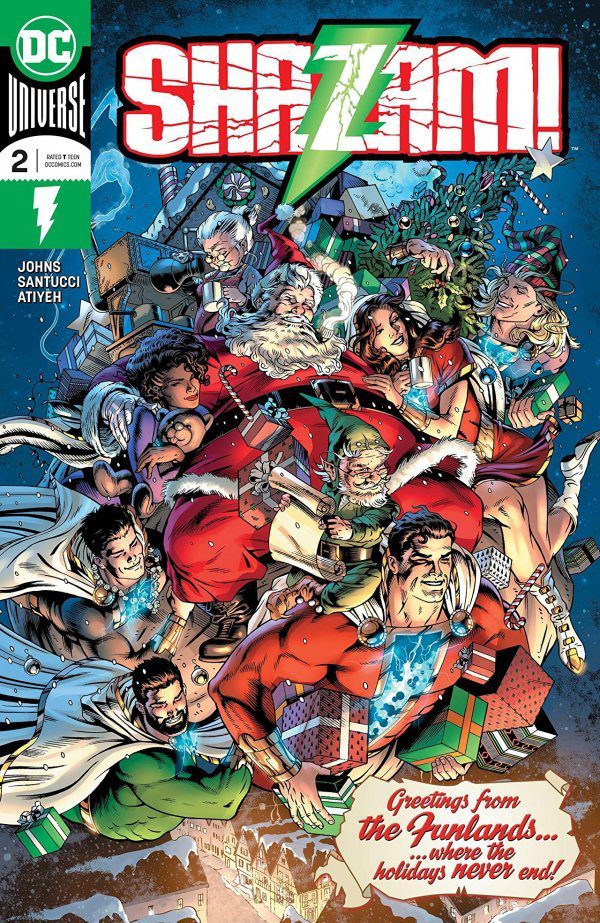 It looks like Geoff Johns is holding on to what ended Shazam! #1: the arrival of Bill Batson’s dad. He’s still hanging around to start Shazam! #2, but Johns spends next to no time on him. It’s a bit frustrating and perplexing at first, but it’d be best to hold on to that storyline until Billy and his siblings get back.

Speaking of which, this Funlands place isn’t exactly settling. Kind of hard to warm up to a place that welcomes you with a miniature clown that’s either in some kind of a rush or simply agitated. The other problem, of course, is this place seems too good to be true—which means it probably is.

When you’ve got someone named King Kid, Ruler of the Funlands in charge, you have to imagine something will go wrong. And this guy says he’s part of the family? This only has a recipe for disaster.

Though things could be worse. For example, you could be the doctor tending to Dr. Sivana—clearly not a fun experience. (Though, even if you’re tending to a normal human being, being the physician for another doctor can’t be fun.)

Sivana is going through the steps to unleash a creature we haven’t heard from in a while, and will likely be a major problem soon.

Johns has also placed significant emphasis on two of Billy’s siblings: Freddy and Mary. Something tells me Mary is right to be questioning every idea Freddy proposes. Not just because they’ve been questionable at best, but more to do with Freddy’s actions on the train. In particular, the panel where he says, “Let’s do this, magic subway car!” Everyone else is freaking out while Freddy’s face is covered by shadows in such a way that he appears menacing.