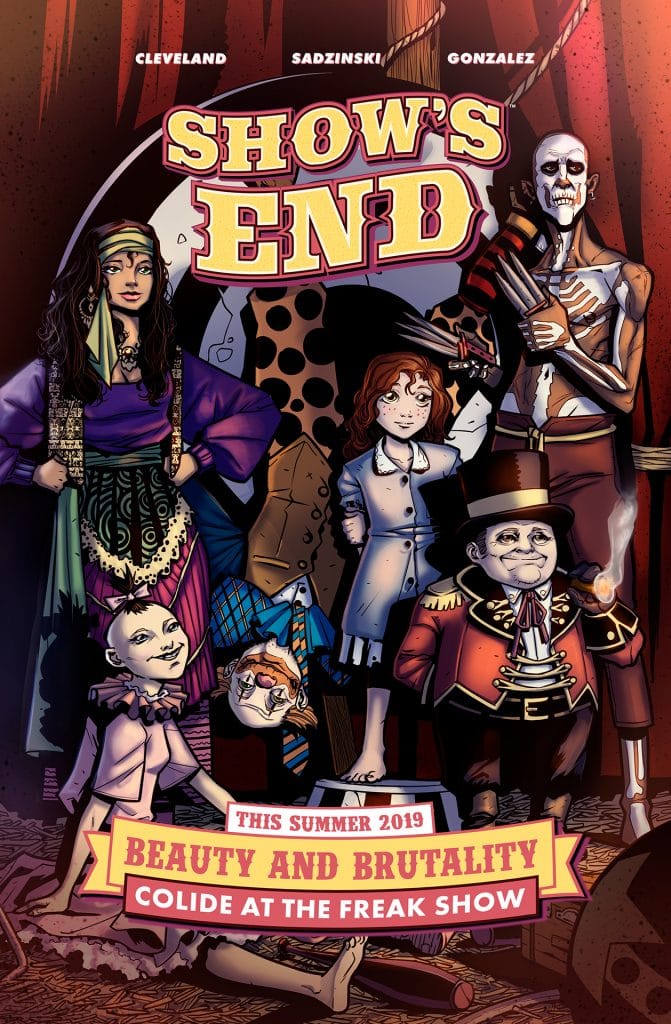 Mad Cave Studios Welcomes you to the Freak Show

This August, guzzle sugar on your funnel cake, step inside the big top, and enter a world where oddity meets outright bigotry set in an early twentieth-century carnival. Show’s End, the first of Mad Cave’s line of books released by the 2018 talent search winners, Anthony Cleveland and illustrated by Jefferson Sadzinski. Colorist Julian Gonzalez (Battlecats) and Letterer Justin Birch (Knights of the Golden Sun) complete the creative team on this eclectic title which I had the chance to receive an early admission to check out.

Graphic novels are prime adult entertainment; gold mines for new ideas, far beyond the traditional “long underwear” heroes of most books from corporate comic companies. Show’s End’s greatest achievement isn’t just the main event level artwork, eye-catching characters, or smooth lettering, it’s taking the chance to showcase that which is different. Being different, in fact, is the main theme of this title which takes place in Georgia in 1928, a time when being different wasn’t smiled upon, or all together safe.

The book features a carnival of misfits, forming bonds based on their shared status as outcasts. A twelve-year-old, orphan, girl named Loralye stumbles upon the carnival one night while stealing apples from a farmer, basically a female Aladdin in the South. Once she finds refuge in the carnival, she and the reader are exposed to a wider world of humanity beyond the white-anglo-saxon-protestant populations the carnivals visit to entertain.

The artwork is certainly a stand-out and the lettering is so smooth you barely notice it’s there. The storyline in the opening issue does a great job at introducing the characters without feeling dumped upon like a horse cart of manure outside the fairgrounds.

The “Dark Carnival” style story though has been attempted elsewhere, so after the first issue, I’m left wondering what will Cleveland do to continue to stand apart? The book certainly features different types of characters, but how will this story distinguish itself from what else is out there? Will it become a standard story of class warfare, freaks vs. norms, or will Cleveland take the reader in an entirely new direction?

I’m looking forward to finding out in Issue #2, on sale in September, just in time for my Birthday.

In the meantime, Issue #1 is coming in August, check Mad Cave’s Website to order!