Sicario: Day of the Soldado Review

Sicario: Day of the Soldado (2018)
Lionsgate

One thing I’ve always enjoyed about any movie is when writers do a stellar job of bookending their films. When they’re trying to send a message that sets up their narrative, and by the end of the film they’ve brought it all back around to remind us where we began. This especially rings true in the first SICARIO film. And it’s something I was looking out for in the beginning of the sequel, SICARIO: DAY OF THE SOLDADO. As it turns out, a few things were missing from the sequel that made the first installment an amazing piece of film. That’s not to say this is a bad movie. It’s not. Not at all. It’s quite entertaining in its own way.  The movie starts off with one of the most terrifying visuals I’ve ever seen on film (more on that later). Due in large part because of its relevance to the things we’re dealing with in the world today. To start off on such a powerful note it was disappointing to see that the rest of the film didn’t maintain the same consistency.

The story revolves around an undercover operation that involves abducting a cartel leaders daughter, pinning the abduction on a rival cartel and hoping that it will manifest into a war between the two. Why? Because it appears that ISIS has cut a deal with a cartel to move their people across the border to commit terrorist acts. One that caused the “terrifying visual” I referenced earlier.

Not to get off topic but I’m interested to see how audiences deal with that opening scene. It was a ballsy move by the filmmakers to even shoot the scene because of how sensitive the material is. It’ll stir up plenty of conversation as well as controversy. Drop me a line, @pacingpete, on twitter and give me your thoughts. Cause, I’m honestly torn on the scene.

Back to the review.

There’s plenty of action this second go around, and the performances are just as good. Thanos…um…I mean Cabl….dang it…I mean Josh Brolin does a solid job as the man the government taps to do their dirty work. His no-nonsense attitude is a perfect fit for the tone of this movie. Benicio Del Toro also returns as the hitman, or “Sicario”, that Brolin goes to for assistance for this operation. Their chemistry works just as well the second time around as it did the first. Even when their situation changes and they’re both put in a position that not only jeopardizes their operation but their partnership as well.

While I did enjoy the film, I did take issue with certain aspects of it. But, these issues spring more from what I enjoyed about the first film. Whereas the first movie was very topical, had a clear narrative and presented an overall question to the audience, the sequel ditches some of those aspects and instead goes a bit heavier on the action and sets things up for what could be a third film in this new franchise. 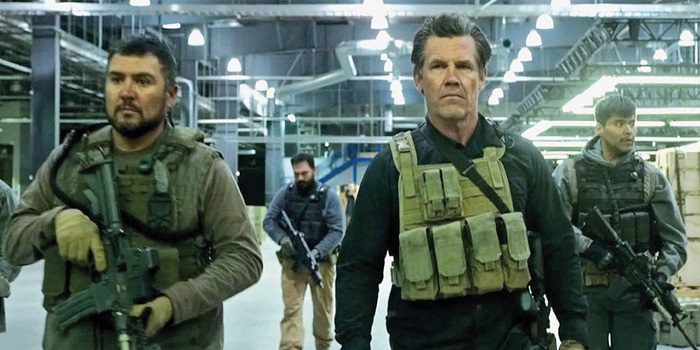 Overall, I was entertained by the action and performances. Especially, by Benicio Del Toro’s performance. The first movie did an excellent job making Del Toro look like the right gun to hire for the most necessary situation and a badass at the same time. ‘DAY OF THE SOLDADO’ pushes that even further turning him into a bona fide action star. Which is why I think a third movie going forward would have to completely revolve around him.

To wrap things up, ‘SOLDADO’ is a good action movie that strays from what made the first film great. But, is still most definitely worth the watch.