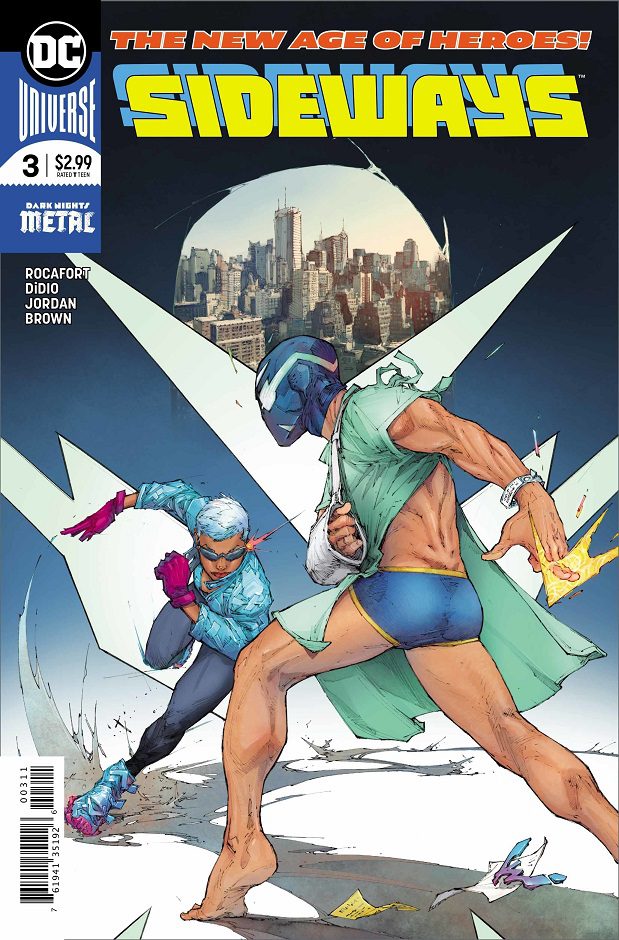 Sideways #3 starts exactly where the previous issue left off. Derek James is surrounded by his unconscious mother and best friend, facing down this new Speedster who swears James’ loved ones are dead. Derek knows she has to be lying but still checks his mother and best friend Ernie’s pulse. This distracts him enough for the Speedster to run full force at Derek, only for him to open a rift just in time.

Sideways #3 forces Derek to see how complicated good and evil can be. Derek tries his best to talk his way out of this fight but fails. Nonetheless, we still see growth in Derek because of this fight. Kill speed prior to being a speedster was diagnosed with leukemia and could not afford treatment. After becoming a speedster, she robs and cons her way of getting the funds only to discover her speed increased the growth of her cancer and she is too sick for treatment to work. When Killspeed tells Derek her story he sympathizes with her and tries to reason that if she should return to the to doctors for and turn herself in because the police will treat her fairly after hearing her story.

However, Killspeed responds poorly making Derek realize she is past the point of reasoning. It is heavily implied that this villain is passively suicidal. She mentions she has nothing to live for. Through Derek’s inner monologue it is clear he wishes he could have helped more and see that

“if this is the end result of being heroic, I don’t much like it.”

My one major caveat with this issue is the villain’s motivations do not make sense. I understand her desire to kill doctors, but not innocent civilians. I love the idea within itself and would have enjoyed seeing her attack pharmaceutical companies and maybe even oncologists offices. However, it doesn’t make sense why she is killing innocent civilians and patients receiving treatment at a hospital. The only explanation we are given is that Sideways and his friends are “collateral damage.”

Sideways is my favorite of DC‘s New Heroes line. Derek is a relatable, lovable, but reckless teen and I am excited to see his growth continue. His best friend Ernie is my favorite character in the book because her quirkiness reminds me of the type of charm I saw in characters from Gotham Academy. Kenneth Rocafort’s art is beautiful and one of the biggest reasons I continue to look forward to this book in my subscription box. He draws people of color very well, which is important since Derek is of Hispanic origin.

In addition, this issue is fairly dialogue heavy and I am impressed that despite this, Carlos M. Mangual’s lettering never overpowers the art. While I am not a fan of the suit’s colors I cannot fault Daniel Brown for that. His execution of the coloring on this book was done very well.

I will continue to pick up this book and I hope to see this character interact with bigger DC Comics heroes in the future.