There are many perilous ways one can spend time off - Volcano-boarding down Cerro Negro, Nicaragua’s active volcano, or maybe bungee jumping from a helicopter over the bubbling crater of Chile’s Villarrica.  How about a visit to Sao Paulo’s Snake Island, home of some 4000 golden lancehead vipers whose venom can melt human flesh, or shark diving without a cage in South Africa.  But nothing is quite as hazardous or risky as a night in the pit at a Slayer concert.  Add to that the ferociousness of Lamb of God and Behemoth, and you’ve got a Satan-approved triple bill of Biblical proportions. 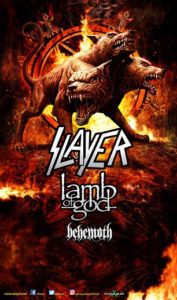 The six-week expedition will rage across North America beginning July 12 in Bemidji, MN, winding up in Phoenix, AZ on August 20.  Slayer and Lamb of God will also play Wisconsin’s Rock Fest 2017 (7/13) and Rock USA 2017 (7/15), and then meet up with Behemoth at the Chicago Open Air Festival on July 16.  Tickets go on sale Friday, March 3.To purchase tickets to a concert near you click here.

Confirmed dates are as follows.