Poor Slime-San. He was out enjoying his slimy life, taking in the scenery and overwhelming beauty that is nature, as balls of slime do from time to time. Then before he knew it, a giant worm raced toward him and he was immediately devoured. However, being eating is half the battle. Our slimy hero has yet to be fully digested and there’s still hope that, with our help, he could make it out alive.

Slime-San is a platformer in the vain of games like Super Meat Boy, where you take a little slime and his bird friend through a hundred levels of a giant worm’s digestive system in order to hopefully escape out of the worm’s mouth.

These hundred levels are divided into five sections, with each section containing twenty levels. Each of these levels contains four stages that you must progress through. Located in risky locations are green apples, four per level, and even harder to find are gold coins. You can transform your slime by buying new shapes, outfits, and in-game art using your apples, and even unlock classic arcade games with your coins at the Slumptown, a little town that exists within the worm and is populated by all the creatures that have also been swallowed by the worm. 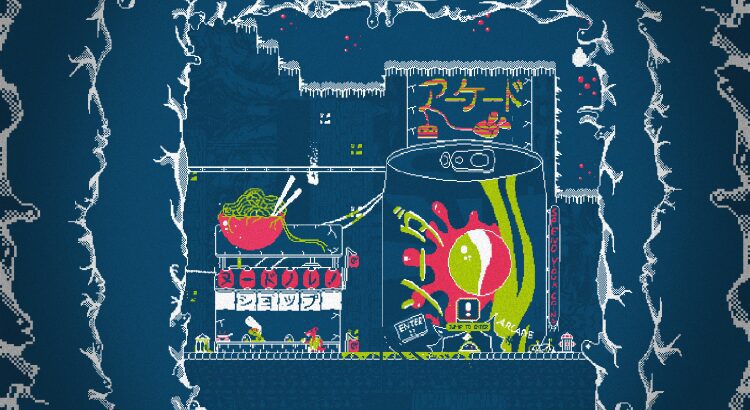 When you look at Slumptown, it makes you wonder what kind of stuff this worm has eaten.

Slime-San’s gameplay requires a great deal of patience and skill. The player can jump and run on platforms, and can jump off or slide down walls. When jumping or walking, players can perform a dash maneuver that allows them to quickly traverse past the various dangers waiting to destroy our little slime ball. As if things weren’t hard enough, if you take too long within one stage of the levels, stomach acid will begin to consume the entire stage, eventually killing you if you don’t finish the stage soon enough.

And the levels themselves are truly imaginative. I found myself really having to think about how to traverse the obstacles in my way and recall what abilities my little slime had learned and was capable of. That added urgency pushes you to find that balance between patience and speed. Once I figured it out and completed a level, I was met with a feeling of satisfaction each time. And that feeling pushed me all the way through to the end of the game.

And while this game can be incredibly tough, you are never faced with game over screens. In fact, as soon as you die you are quickly given another go at the stage. So while the gameplay itself is unforgiving, the fast-nature of having a do-over is a welcomed, forgiving aspect of the game. In fact, I died 43 times on one level, but it honestly didn’t feel like it.

The core gameplay requires fine control and split-second timing, and while it is similar to Super Meat Boy, it can easily be compared to the gameplay and level of difficulty featured in traditional platform games such as Super Mario Bros. and Ghosts ‘n Goblins.

The overall look of the game features some great looking pixel artwork. The creatures within the worm are imaginatively strange, and I couldn’t decide whether I should be horrified or to erupt with laughter. Speaking of laughs, some of Slime-San’s dialogue features the funniest moments I’ve seen in a long time for a video game.

While all of these elements would make for a good game, it is the retro-styled music that pushes this game into another level. You can tell that the creators of this music really have a solid understanding of music from the 16 bit era and how it can enhance gameplay and even add urgency to an experience that is already demanding your best skills.

Whether it is the gameplay, the pixel art, the humor-filled dialogue, or the fantastic music, it is clear that this game was made with great care by a collection of brilliant minds. The team at Fabraz has made a truly amazing game and I would absolutely suggest Nintendo Switch and PC gamers to give this title your time and money.