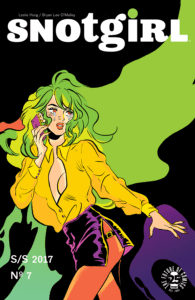 Last we left Lottie, AKA Snottie by her cool new friend Caroline, she watched that cool friend push her stalker off a building. However, Charlene survived the accident, and now Lottie is finding her cool new friend has become distant, and… well… not as cool. 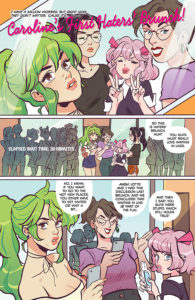 In order to introduce Caroline to her friends, she invites her to their Haters’ Brunch, where Lottie finds her cool friend has become somehow boring and fails to make a positive impression on her – ahem – friends. Introducing a friend as added some stress onto Lottie as she wants both parties to like each other – she finds her old friends suddenly embarrassing, and Caroline boring and judgmental. She can’t win!

But let’s move away from the saga between Lottie and Caroline, and focus on Charlene, and Lottie’s ex-boyfriend, Sunny Day (who is dating Charlene, by-the-by). Nothing boosts a spirit like having your boyfriend leave you for your stalker.

Charlene awakes from her coma, and is advised by a mysterious physical therapist (who happens to be Caroline’s… er… friend? Brother? Cousin? No one knows) to take a walk, and retrace her steps at the scene of the crime. She passes out again, but in her loopy state thinks the plastic surgery she got was to make her look like Lottie, rather than reconstruct her face. 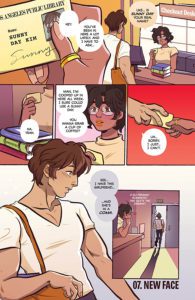 Priorities, am I right?

Rest assured, Charlene is okay, aside from her obsession to become exactly like Lottie, and she’s still happily in love with Sunny – and vice versa.

Let’s get back to Lottie and her friendship conundrum! The only person who knows about her extreme allergy problem is Caroline, which earned her the touching nickname of Snottie, remarking on the extreme leakage of green colored mucus. Ah… the mind is powerful, isn’t it? Didn’t that just conjure up a lovely image? 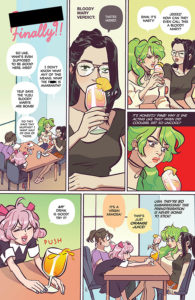 However, Caroline, AKA Cool Girl becomes Cool Girl to the others after a ride to San Diego to attend a Comic-Con After Party, when Caroline lets everyone in on Lottie’s unfortunate medical circumstance…

… which is where the story ends, with everyone in the car calling Lottie her much-beloved nickname.

Well, there’s no allergy medication mishaps in this issue, nor any expulsion of snot, but the mystery behind Cool Girl deepens with her friend/cousin/brother/question mark’s involvement in this accident. What’s he trying to do with Charlene? Hmmm……